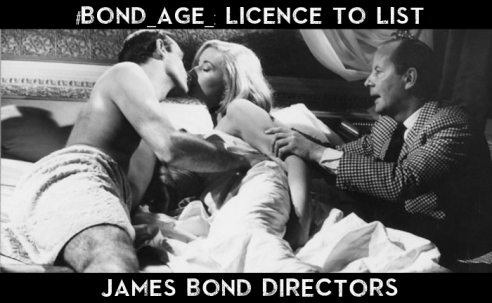 Been a while since the blog has done a post dedicated to the longest running movie series in history. Since I’m attending the re-screening of the most recent film, SPECTRE, over at the Petersen Automobile Museum this evening, we should fix that. Reblogging what the good folk over at #Bond_age_, The James Bond Media Project, recently did should suffice. The piece by Greg McCambley will do nicely as it ranks all the James Bond directors, and I’m not saying that because we agree wholeheartedly.

From Terence Young to John Glen to Lee Tamahori, Greg does a simply splendid job at gauging the impact that each of the Bond directors had during the five-plus decades of Bond…James Bond by highlighting their achievements. As he put it:

Without a doubt the top five I enthusiastically agree with, and in the same order, surprisingly. There wouldn’t have been the kind of James Bond that’s lasted this long without Terence Young molding Sean Connery and the onscreen character as he did. Moreover, good to see Martin Campbell picking up more acclaim for his superb twosome1. But it’s the next quintet that’s going to get the most disagreement among Bond fans, me thinks. Especially with this entry that’s going to draw criticism, no doubt:

Granted, I didn’t enjoy SKYFALL as much as most did, but I’d still have Sam Mendes higher2, as would Lewis Gilbert’s contributions. We’ll just leave Lee Tamahori exactly where most Bond fans will place his lone work…right along with that horrid Bond number Madonna left in her wake. Either way, the licence to list article is a thoroughly enjoyable read that should draw a lot of attention, and I recommend to Bond as well as movie fans alike.