Note: The following was my contribution to this week’s Decades Blogathon, which Mark and Tom generously hosted, and reprinted here with their permission.

A heartbroken Warren Beatty looking down on a canyon road as Paul Simon’s acoustic version of Silent Eyes plays in the background. The lingering vestige of Hal Ashby’s Shampoo would use a mournful version of a cut from his Still Crazy After All These Years album out that year as the scene faded to black. Always recall this when looking back at it, and the time. The lone contemporary song of the film’s soundtrack shouldn’t work at all considering the 60s tunes that littered it, and marked an epoch so distinctly.

Yet, for a film that reached a forty-year milestone that lyrical lament offered a fitting bitter quality, and an eloquent end for the piece and its protagonist.

Banker: “What kind of references do you have, Mr. Roundy?
George: “I do Barbara Rush.”

A pity a number of today’s movie-viewers have never seen Shampoo. Even aficionados have seemingly forgotten it since the film debuted in March of 1975. A deft and layered work director Hal Ashby crafted ever so well, with key input from lauded scribe Robert Towne (Chinatown) and Shirley MacLaine’s better looking sibling, Warren Beatty. Truly, it marked the midpoint of a truly sucky decade like few others. Right as the suck appeared to reach its crest too, or so we thought. The Fall of Saigon lay the next month over.

No, the hits just kept on coming. Mind you, I speak from experience. Having survived the period, first-hand. I bear the scars of it, if you want proof. Still, the decade remains my all-time favorite for its influential filmmakers and the cinema they enriched and buoyed us with. I’m in good company for that thought, too, it seems. As mentioned last year over at Keith’s site when he asked my answer at his roundtable to what had been “…the greatest decade for movies?”:

“Easily, it’s the 70s. A particular span of time that proved to be one of the most tumultuous for many in the latter half of the 20th century. A decade filled with economic downturns, disillusionment, and the realization that things really could get a Hell of a lot worst. And did. The timing for film couldn’t have been better, though. For all of its crises and missteps, corruption and loss of idealism, the Me Decade heralded some of the absolute best cinema this country had to offer for the period.”

Naturally, I turned to 1975 in particular when Mark and Tom proposed their ‘Decades’ Blogathon. One that focused, like now, “…on movies that were released in the fifth year of the decade.” Didn’t take me long to latch on once more with Shampoo, and a chance to convince those reading. Described as a dramatic comedy, it offered a satiric look at not only the sociopolitical (presidential and sexual) via a heady few Angelenos, but the cost of love then as it sifted through the bed sheets of their sex lives.

All as the 60s began its close.

The mid-70s film surprisingly centered its story around the Election Day of 1968. Nixon-Agnew said it all. The irony set early for the audience of the time as the Watergate Scandal had broken open by ’72, with Nixon’s impeachment a couple years later quite fresh in peoples’ minds. Shampoo‘s producers even benefitted, unknowingly, with the film’s release mere months before the official end of the Vietnam War, and the final disillusionment that came with it. I tell ‘ya, this decade could do irony.

The film, care of its Robert Towne and Warren Beatty screenplay, posited all the crap happening there and then a result of what took place the decade prior; blinded with all that ‘free love’ behavior and ‘flower power’ mentality the “Swinging Sixties” offered. Manifested strangely enough with a Beverly Hills hairdresser of some repute. Beatty, of course, as George servicing his female “clients.”1 Its running joke, going against the conventional thinking of most men in the film and the time, being the stylist was a raging heterosexual.

Who better to bring it to a head than Hal Ashby.

If there was a 70s filmmaker more authoritative, let alone consistent, during this span, they’re in rare company. The Utah native turned California hippy learned his art cutting and pasting pieces of film together during the 60s and enjoyed his greatest output in the Disco Era. His underrated debut, The Landlord, prepped the cult hit Harold and Maude, The Last Detail, and then this. Bound for Glory next before capping the spell with Coming Home and Being There — an Oscar tally totalling 7 wins, 24 nominations. ‘Nuff said.

Even among that impressive set, I think Shampoo was in the upper tier of his cinematic work. Certainly, the film traversed a broad range of crisis and comedy, and invigorating carnality, in the most entertaining way imaginable. Avidly focusing on an interconnected coterie of the “beautiful people” then, who’d be internet media whores today. You may not like them, but can’t take your eyes off — located in an area that’s always gathered too much attention for its self-absorbed few amid the Los Angeles dwarfing them.

“Doing it” with a bang up ensemble cast, too, headed by a Warren Beatty at his peak. The latter half of Bonnie and Clyde consummating his conquest of Hollywood, like his friend Ashby, this very decade; ironically, including his girlfriends Julie Christie (then current) and Goldie Hawn (ex-) to parallel the tale with their roles. Carrie Fisher’s feature debut as a fifteen year old seducing George with an immortal three little words2, a full two years before “A long time ago in a galaxy far, far away…” 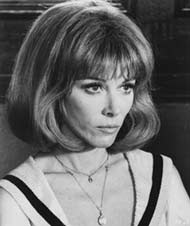 The great (the most repeated key word of the script) Jack Warden and a number of recognizable character actors (Jay Robinson, George Furth, Jack Bernardi, Howard Hesseman, Brad Dexter, and a young Tony Bill), lent the production considerable note. Yet, surprisingly the men played second fiddle to the women of the cast. Especially when another former date, Lee Grant as Felicia, was on screen — earning her supporting Oscar on her feet as well as her back, as only she could.

“Oh god, Lester you are a miserable human being. You’re not helping anybody! You’re just twisting arms here for a lot of silly sons of bitches who are all out for themselves. You’re kidding yourself if you think your new business partner is going to keep his hands off your girl. Or if she’s going to keep her hands off of him!”

Indeed, it’d be the legendary B-movie director William Castle who’d provide a scorned Jackie essential ammunition care of the question all rich old men ask young beautiful women — and she’d answer in the most uproarious fashion, drawing the best reaction ever from her sugar daddy lover and his wife. 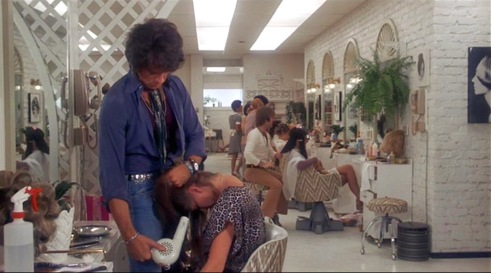 That’s saying something considering Beatty’s hairdresser George pulled in the most female once-overs this side of his namesake Clooney in the film; a good bit of it geared toward the worship of a certain male member, his handheld hairdryer symbolizing you-know-what throughout. Notably how much mileage it got in a 36-hour period. Likewise, the grief it caused…principally for its owner. Clint Eastwood’s Play Misty For Me may have suffered nastier consequences following the “free love” era, but he’d get his, too.

Moreover, Robert Towne uniquely signified the place he made a living writing for, Los Angeles, through scenes and dialogue as only he could. Scripting characters against some real-life L.A. history along the way, keenly having an ear for the common and outlandish parlance of the day. Those we give our hearts to, as well. Few regard this as highly as his Chinatown screenplay, which came out the year before. Drama mostly beating out comedy. But, “Dying is easy. Comedy is hard.” This razor-edged script is better than you think.

Additionally, few needle-dropped soundtracks of that or any other decade, were as memorable. Its songs impacted the tale so conspicuously. The Beach Boys’ “Wouldn’t It Be Nice” exemplifying George and Felicia lovemaking during the opening credits set the tone for the duration; all the way through to The Beatles’ Sgt. Pepper’s Lonely Hearts Club Band numbers doing much the same by the third act’s affluent hippy party3. Sadly, neither the movie’s musical accompaniment or Paul Simons’ score were ever released.

Existing only for those lucky enough to screen this Hal Ashby classic.

Shampoo may have chronicled Peyton Place…er…Beverly Hills byway of a crackerjack and sexy satire, even if it’s filled with petty messes and moral decay, but did so with 70s style. And at a key point in time. The bed-hopping, dashed dreams, and selfish betrayals among the self-important in the midst of prepping for a fateful Election Day still influential4. Hal Ashby’s good friend Norman Jewison, who got him into directing, would use George’s womanizing excuse — “makes me feel like I’m going to live forever” — as a subplot to his 1987 Moonstruck film.

Stood in well for the bad faith and falseness (socially and politically) of the Nixon-Agnew ticket, which would blossom come the ‘Me Decade’.

Seems strange, unfair even, that more haven’t seen, or at least promoted the movie to others. In the four decades since its release, the Hal Ashby, Robert Stone Warren Beatty film has been written off, apparently; lost somewhere in film history. Displaced by other notable 70s fare that epitomized the era’s bleakness and disappointment more forcefully. Overlooked the 1975 production’s wry cleverness, perhaps dismissing it as a silly snapshot of the 60s sexual laxity and psychedelia through a bell-bottomed mindset.

Deciding somehow it doesn’t apply to us in the new millennium…but, oh it does.

Look again at my definition why the period remains a favorite. The 70s film penchants of love and death, nevertheless, apply here. An antihero, George (or at least his cock), with death stalking unexpectedly. Really, you ask? Sure, it’s hinted throughout. We initially meet Jill fearing her death hearing a gunshot in a celebrity-strewn canyon; George stating he was to take Jill to the “El Cholo” restaurant another knowing allusion. By the end, she’ll dump the philandering George for an upcoming young film director.

You see, they’re not just some actress and her hairstylist boyfriend.

No. What most missed was Shampoo gave audiences an unexpected, fictionalized backstory to the real-life events of Sharon Tate and her ex-boyfriend Jay Sebring5, byway of a risqué dramedy. The sadly fated pair of L.A.’s infamous Tate murders, here disguised by farce; pictured before their grisly demise, along with a handful of the affluent, less than a year later in Benedict Canyon by Charles Manson’s twisted hippy followers6. Even the aging financier Lester warned our protagonist of what was to come late in the film:

“I don’t know anything any more. You never know, you know. Ah, one minute you’re here, the next…pfft. I just wish I knew what the hell I was living for. You can lose it all, y’know. Lose it all no matter who you are. What’s the sense of having it all. The market was down ten points last week, goddamn Lyndon Johnson. Yeah, well. Maybe Nixon will be better. What’s the difference. They’re all a bunch of jerks.” 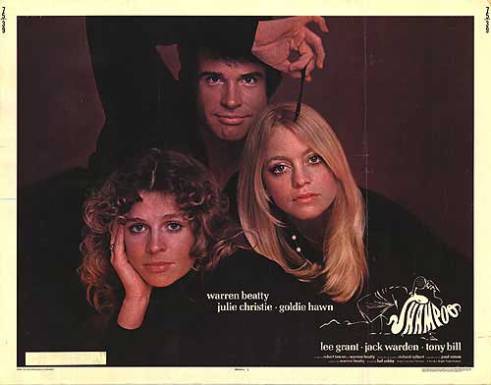