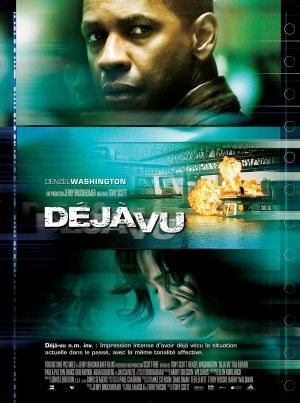 With the passing of Tony Scott in 2012 still kind of shocking, looking back on his films remains the best tribute for this artist, I think. He shared a brilliance in the medium with his older sibling, Ridley Scott. While both apprenticed via their TV commercial production work, movie viewers definitely knew when the younger brother traipsed across the screen in front of them at almost any turn. Primarily through his distinctive, individual stylings. With his frenetic camera and editing, along with his saturated colors and bombastic action storylines, Tony stood out.

From The Hunger, Top Gun, The Last Boy Scout, to True Romance, this was so. Even more with Enemy of the State, Spy Game, Man on Fire, and Domino. Critics blasted him, but over time ate their words. And fans, me included, loved his excesses, no matter. His 2006 film, Déjà Vu, has registered heavily with me since his death. Everything that made a Tony Scott film, a Tony Scott film, was right there. Including the lead performer he made five characteristic films with, Denzel Washington. Scott beating out Spike Lee for most collaborations with the actor.

Besides the things that traditionally worked for the filmmaker, Scott’s opening titles sequence for Déjà Vu hit on all cylinders among his many productions, which I’ll attempt to highlight. Setting it in motion, the haunting chords of Harry Gregson-Williams‘ score sink in straightaway as the animated logos splash onscreen moodily. The well-known Touchstone Pictures and Jerry Bruckheimer Films emblems, in fact, along with theme song, roll back mid-stream to begin yet again. Mimicking the story device of the future/past aspect of the sci-fi film.

Once we’re introduced to a post-Katrina New Orleans, with all the sights and sounds of celebratory Mardi Gras festivities as a backdrop, the theme adds a brief, evocatively voiced passage as the titles commence their transitions across the screen. In contrast to the reverie, along with the mournful strings, the music foretells the tragedy set to arrive. All while credits bespatter the screen, shift elsewhere, and blink before running off. Their designations framed by a sliding rectangle motif as the terrorist victims move into place within the sequence.

Tony Scott’s custom of an ever-moving camera right in their midst, making the sequence personal in his unique way. The entire key event of the movie laid out as the opening titles is written on the motion picture screen, and strangely reminiscent. With great care, the complete progression builds to its stunning calamity. The whole a setup to Scott’s colorful mayhem reaching its terrible bright glory by the scene’s conclusion. The sequence remains something to behold. A praiseworthy bit of filmmaking by someone, I daresay, we will miss for quite some time.

Copyright infringement prevents posting the sequence on YouTube, so the slideshow will have to do.