Bruce Eder writing for Allmusic described the work of those “Searching for her silver light…”:

“Eldorado was strongly reminiscent in some ways of Sgt. Pepper’s Lonely Hearts Club Band. Not that it could ever have the same impact or be as distinctive, but it had its feet planted in so many richly melodic and varied musical traditions, yet made it all work in a rock context, that it did recall the Beatles classic. It was a very romantic work, especially on the opening “Eldorado Overture,” which was steeped in a wistful 1920s/1930s notion of popular fantasy (embodied in movies and novels like James Hilton’s Lost Horizon and Somerset Maugham’s The Razor’s Edge) about disillusioned seekers.”

The Electric Light Orchestra was unique in that they harkened back to The Lads and the 60s, but stayed true to the British rock of the 70s. The band from Birmingham, England a bigger hit here in the U.S. than in its native UK. Their fourth album, about the thoughts, images, and sensations that distract during daylight or occur in sleep, stuck in listeners’ heads in more ways than one.

When Sharon Osbourne (yeah, Ozzy’s spouse) first showed her cover design to the band she managed, they thought it crap. They relented when she explained it came from the classic film that paralleled their album’s theme. In the 100 Best Photo Album Cover article by Popular Photography Magazine, writer D.S. explained why a still frame of an American musical fantasy conveyed this so well:

“And what is the most famous dream of all? That’s right — the one Dorothy had about Oz, witches, and ruby slippers. The album’s cover featured a pivotal still from the 1939 film.”

ELO’s first concept album, The Wizard of Oz image instantly recognizable by young and old upon release. The key moment of the film, one frozen on the psyches of movie-goers, young Dorothy’s ownership of the enchanted slippers never more clear as the villainous old crone greedily wishing to possess them was manifestly spurned. The image electrifyingly etched for viewers of the film and album. 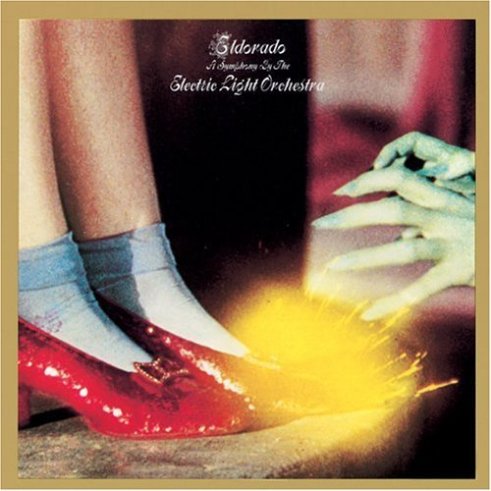