“The man’s breathing grew shallow and steady, his heartbeat slowed, and when the surge of his pulse grew no slower, Maggie knew he was sleeping. She lifted her head enough to see him, but seeing him was unnecessary. She could smell his sleep by the change in his scent as his body relaxed and cooled.”

I reckon no one has ever written a believable novel where some house cat heroically rescues their owner and/or guards them by fang or temerity as they lay prone. Maybe, someone will offer up the 1985 Lewis Teague film based on Stephen King’s short stories, Cat’s Eye, as a counter. Go ahead, but I did qualify my statement with the word “believable”, didn’t I? Anyway, allow me to retort with the family dog, Thor, from Eric Red’s underrated Bad Moon from ’96. You see, the subject of dogs as heroic figures, whether in books or film, are numerous.

Yet, telling a more than satisfying story featuring a canine as a key central character is not an easy trick. It’s harder to achieve than you’d imagine. Dean Koontz has made it a whole sub-genre in his work — although, not aways successfully. Novelist Robert Crais effectively pulls it off with his nineteenth book, Suspect. His first standalone book in almost seven years, since The Two Minute Rule, is worth the wait for crime/mystery enthusiasts and the author’s readership.

A clear favorite of mine, the author manages the transition from series work (our man Bob being the creator of the longstanding Elvis Cole/Joe Pike novels) to this by not missing a beat. He stays within the distinct sphere of his notable L.A. crime writing with the effort. However, it’s the players he deploys that catch you off-guard.

Synopsis (from the author’s site):

“LAPD cop Scott James is not doing so well. Eight months ago, a shocking nighttime assault by unidentified men killed his partner Stephanie, nearly killed him, and left him enraged, ashamed, and ready to explode. He is unfit for duty—until he meets his new partner.

Maggie is not doing so well, either. A German shepherd who survived three tours in Iraq and Afghanistan sniffing explosives before losing her handler to an IED, her PTSD is as bad as Scott’s.

They are each other’s last chance. Shunned and shunted to the side, they set out to investigate the one case that no one wants them to touch: the identity of the men who murdered Stephanie. What they begin to find is nothing like what Scott has been told, and the journey will take them both through the darkest moments of their own personal hells. Whether they will make it out again, no one can say.”

Robert Crais continues to surprise with the stories and characters he explores. And few handle damaged personalities as well as this writer. Certainly, in a context that’s relatable and with a surprising depth of emotion for those who pick up his work. It’s why he keeps acquiring fans, I think. What some tend to forget is a good many of those mangled psyches he’s dished on so well over the years have come from his standalone novels: Carol Starkey (Demolition Angel), Jeff Talley (Hostage), and of course Max Holman from Two Minute. Here, too.

There are recognizable aspects in Suspect fans will spot in this narrative, undoubtably. Not a bad thing, however. Scrutinizing the people, and K-9, set to serve and protect in their best and worse of situations. Crime in the city of Los Angeles, my hometown. And surveying how people relate to each other. Particularly when it comes to the sense of family (or in this case, pack) individuals create for themselves to survive it all. Scott and Maggie make the endeavor fresh.

When Crais speaks through her, the female German Shepherd, it’s dog, not cat, people who recognize the idiom. At the very least, it’s what we all  think is going on in the mind of the four-legged loved ones we choose to live with. So much so, it’s why I now have Lisa Rogak’s non-fiction title, The Dogs of War, as a follow-up. Oh and needless to say, SEAL Team Six didn’t bring kitty along on a certain 2011 op. I rest my case.

You may think just because it’s a dog (or Robert Crais), I’m fawning over this. Not quite. Elvis Cole’s cat is well aware I was cat lover way before I ever had a canine in my life. A feline’s head bump still means a lot to me. So there. Yes, “Dogs have owners, cats have staff”, as my friend Christine reminded me of last year, still rings true. Nevertheless, the author captures the essence of the odd but familiar duo we make for ourselves when a dog enters our life through the superb crime tale he crafts here.

Get’m, Maggie, by all means.

Suspect debuted in hardcover from Putnam on January 22, 2013. The U.K. version was published a few months later on April 11. Its cover (on the right) was again in sharp contrast to Putnam’s. I favor Orion’s because Scott and Maggie are both depicted against the City of Angels backdrop. 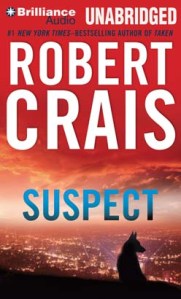 Brilliance Audio released the unabridged audio the same day as Putnam’s hardcover. As has been its custom, Putnam’s cover artwork was carried over for their audio production. For this standalone, studio managers selected narrator MacLeod Andrews for duty. One of the key reasons I so enjoyed listening to The Lock Artist by Steve Hamilton a couple of years back was Andrews’ clear, heartfelt narration. Easily handling the various individual accents Crais, and this city, can throw into a story, he was a more than an excellent choice for guiding listeners through the emotional tale (sorry, couldn’t resist). 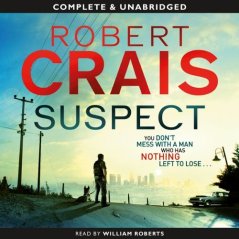 It’s interesting that the UK’s AudioGo is steadily moving away from the Compact Disc format. Their offering, which was available in April like Orion’s hardback, was only offered to listeners as an MP3 download. Of course, if you live on this side of the Atlantic, even this was not accessible. Which is a pity. Their audio productions are well-known, employing some fine and noted readers. William Roberts, who has logged the most time as narrator for the Elvis Cole/Joe Pike series took up the reins for this novel. His readings more overtly dramatic, per his stage experience I think, than Andrews, he nonetheless handled another affecting Robert Crais story with aplomb 1.

Disclaimer: though I was presented with an advance reading copy by the publisher, reviewing it was my choice, and I was not compensated. Drats! I bought my U.S. audiobook on the day of publication. Purchasing Audiogo UK’s took a tad longer to get my hands (and ears) on due to their region restriction. But like the author described in this book, there’s always a workaround to be found. 😉