I’m of a generation that grew up during the height of the Cold War, and thankfully weathered time to witness the ushering of that era’s end. From this longstanding conflict, there has been a mountain of fictional material written across books and films produced from the period. Many, drawing upon the fear and dread from that confrontation. A few generations expected it could only end one way. The full bleak glory when each of the superpowers finally launched their nuclear payloads at one another. It dotted many a work in the period, and may seem bizarre (or perhaps, even quaint) to younger age groups.

I’d submit that Eugene Harvey and Burdick Wheeler’s 1962 novel, FAIL-SAFE, epitomized a good portion of this anxiety, and did it exceedingly well. The well-worn bestseller should lay on top of that particular old-world-view books stack with some pride. The synopsis of the novel, that of the accidental triggering of a strategic bomber air-wing strike against the Soviet Union caused by computer glitch, and its horrifying and terrible solution in the tale, was close enough story-wise to a another such book. Peter George’s (aka Peter Bryant) earlier 1958 novel, Red Alert. So much so, that it caused its author to once sue the tandem of Harvey and Burdick.

Despite that, and though Red Alert came out first (and was later the source material for Stanley Kubrick‘s brilliant black comedy, Dr. Strangelove), I daresay FAIL-SAFE‘s story has held up better in the decades since either book’s initial release. In spite of the fact both were locked into that specific post-WWII military tension, the later novel remains more relatable to current times because of its version in the nightmare scenario. Its basis of a technical glitch I believe rang more true then, and certainly more understandable with folks today, regardless of the passage of time.

The explosion of technology, a direct result of the strained relations between the Western/Eastern blocs (1947 – 1991), in the daily lives of people, especially since the 60s, has had the effect of turning many of us into a technical amalgam, of sorts. Some manage without, but we all inter-relate via computer systems in one form or another nowadays. Most of us are all just users in this span. Which, like the engineering term fail safe, has a terrible irony to it — in the novel’s story and in people’s normal lives when dealing with technology.

Name someone you know who hasn’t suffered through, directly or indirectly, with at least one technical glitch in their lives? Most can’t.

It’s hard to do without a person living some sort of secluded hermit existence nowadays, or part of the nation’s poor who are chronically on the other side of the digital divide. Our daily being today (whether you care to know it or not) revolves around computers and networks (wired, wireless, or social). And they were center stage, in early primitive form, along with the people tied to it, in this thoughtful work. The book’s chapter describing our lives interacting with satellites overhead and missile silos below, offered a haunting glimpse few readers had ever considered beforehand.

I think it was that aspect, so astutely done and written about in the authors’ FAIL-SAFE novel, that made the work worth remembering. One not to be left on the heap of forgotten history, chiefly, because its remnants are still all around us. 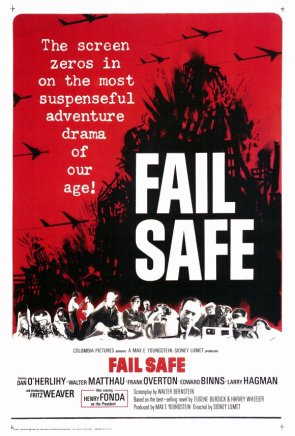 Since I didn’t read this novel when it first came out — hey, I was only 8 at the time, I picked it up only years later because of Sidney Lumet‘s highly underrated 1964 film adaptation. In fact, I still have an old copy of the novel in my library. Fail-Safe, the film, came out the same year as Dr. Stangelove or: How I Learned to Stop Worrying and Love the Bomb. The latter motion picture by Kubrick was easily the more successful of the two at the box office, a critical darling, and remains one of the all-time great films. No question.

Yet, the film by director Lumet was easily the more nail-biting of the doomsday pair because it was not played for black comedy, even if Kubrick’s take was his most brilliant. Certainly FAIL-SAFE endures as a more dramatically haunting film, in my opinion. Satire, no matter how superb, need not apply. I first watched it on local television on one of those late-night Saturday movie shows my generation lived on. Like the striking supersonic B-58 used as the movie’s symbol, compared to Dr. Strangelove’s buff B-52s, it left quite an impression.

Director Joe Dante covered it best a couple of years back in his adept and appreciative Trailers From Hell video examination:

The film was loaded with a great cast of actors, many considered either great, familiar, or without doubt underrated. Who wouldn’t want Henry Fonda as the President trying to prevent a global nuclear war? Outside of his stint in the great film Charade, I don’t think Walter Matthau was ever more casually villainous than he was here as the hawkish civilian advisor to the Pentagon, Professor Groeteschele. And if you only know Dan O’Herlihy from some of his work in the 80s, Halloween III: Season of the Witch, The Last Starfighter, or Robocop), first-time viewers will be more than surprised, and touched, by this actor’s performance as the thoughtful General Black in the piece.

Admittedly, its low-budget pedigree shackles the film some, though not as much as you would think. No military cooperation via the Pentagon was forthcoming in this small New York City-based production, the repeated stock footage of the same jet craft throughout was a telltale sign. Still, as Mr. Dante noted,

“…editor Ralph Rosenblum and Sidney Lumet make a virtue of the limitations by staging scenes in just a few small sets distorted by wide-angle lenses.”

Because of it was a small independent production, Columbia Studios bought it during filming to make sure it’d be released after Dr. Strangelove. The movie’s tight sets and close-quarter lensing by filmmakers made all of the performers’ faces doubly important, especially by the final outcome. Including those of veteran character actor Frank Overton, Fritz Weaver (in his big screen film debut), a young Larry Hagman gathering notice, and keenly, like General Black, Ed Binns as the strategic bomber pilot tested beyond measure, each made important contributions in the dramatic telling of this story.

The framing of entire cast via close-up photography throughout the movie was simply remarkable. Lumet and his cinematographer, Gerald Hirschfeld, used the technique marvelously to convey the tumult and emotions tearing at the insides of the predominately male cast. Its 60s heritage, in the wake of the Cuban Missile Crisis, left no room for overly emotive men. Anguish for the task at hand was handled matter-of-factly, but still with cost. A good example being the highlighted the contribution of the late Dom DeLuise’s small role in the film last year in a tribute post.

Most peculiar, though, but in keeping with the movie’s austerity, there was no musical score with this undervalued work. The film ultimately didn’t need one.

Fail-Safe was at its utmost a classic, but stark cold-war suspense thriller, in either book or film form, to come from that era. However, the real artistry in the film, besides Lumet’s stellar direction, was that it never lost its humanity within its screen adaptation or plotting. Credit Walter Bernstein, another blacklisted writer of the 50s, a victim of the Republican-led House Un-American Activities Committee, for achieving that. The fact that it was beautifully shot in austere but noirishly shadowed black & white remains something to behold.

If you’ve not seen the film, it’s definitely one worth taking the time to do so. All the while your nerves may be left a bit jangled watching it, I reckon. What shouldn’t be forgotten was that all the characters in Fail-Safe, like in the novel, stood out amidst all that safe-failed technology, and assumed its terrible, albeit allegorically Biblical, toll.