Learning all the duties that came with the job of movie theater projectionist, as administered to me by my younger brother, the senior projectionist for the Huntington Park Warner at the time, was a revelation. It changed my outlook toward the whole experience of watching cinema.

A mere week would be devoted to the entire endeavor. Yeah, a ridiculously short span for such a thing. I’m sure it took longer for those who truly made a career at this profession with the movie theater chains. Here, no.

The primary conduit for delivering the basic skills of projecting a movie onto a screen came under the tutelage of my sibling during his work shifts. Not killing him, me, or anybody else in the building at that time the unspoken demand of all concerned. Though it involved no gases or hydraulics, but plenty of electricity, the job was surprisingly pressure-based.

Especially true for older independent venues like this, with owners highly resistant to modernizing equipment because it was too cost prohibitive.

I knew beforehand that traditional theaters had big projectors high up in a booth somewhere in the dark recesses of a building’s structure. If you look carefully at the above image, between the ‘E’ and ‘R’ on the vertical WARNERS sign was where the booth was situated inside. Those not under the balcony could gander up at the small utilitarian booth windows at the high-end of the back wall. 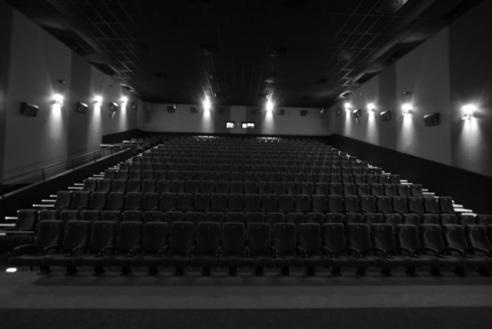 Most of the time, though, one didn’t bother to look or care.

Hey, as long as the movie’s playing, you had your snacks, a good-looking date with you, and the seats weren’t sticky, all was bliss. Right? Of course, till it wasn’t. I quickly learned it was not going to be the concessionista that patrons would be [insert one or all: cursing, yelling, whistling, or throwing popcorn] at when the movie didn’t start or unexpectedly stopped.

R-i-g-h-t. It’s the projectionist’s fault. The same one who’d receive that wonderful call from the concession stand:

My kid brother taught me that just about everything came down to timing. In life and in movie projection. Screwing up either usually resulted in bad outcomes. Who was this guy? As of this writing, things are changing significantly. I’m pretty sure most of the technical aspects of projecting movies I’ll relate are ancient history of the booth. The newer digital movie projection systems, care of studios’ demands to stop providing 35mm prints to movie theaters and the few remaining drive-ins, are forcing the change.

In the mid-70s, movies were still distributed to theaters in two or more movie reel cans. They were gray colored in my day. Each contained two or three reels of 35mm film within a single can. If you saw or lifted one of these, you’d think that was a lot of film. Not really since it ran through the projector at twenty-four frames per second.

Each reel, at its maximum, held almost 20 minutes of the movies (usually running an hour and a half to two hours) we served up.

Nowadays, those left to deal with this fast disappearing media, upon receipt, move them to a workbench to manually splice each reel’s film together so it’s one long collection of cinematic material. It’s then loaded onto a platter of a Single Reel System. I’m sure it made things so much easier. That is, if you had one of those — I wasn’t that lucky.

I was taught on what was known as a Two Reel System — the older carbon arc variety. No splicing of film together to make it one large, easy to project unit. Nope…didn’t happen. The Warner’s projection booth had three, count them three, Simplex carbon arc projectors. Museum pieces, really. Only two were used at any time. The third kept as cold backup for when one of others arrested on you, which could happen given the age of these heirlooms.

From the cans you loaded each of the reels into individual reel storage bins situated right below the work bench. A number of slots were under there to stockpile the feature films for our double-bills, or the rare triple, which were our norm. There they sat until it was time to use them. Here’s where that timing my brother spoke of became critical.

If you screwed up the split-second timing of movie projecting, it caused a major hiccup in sound and picture continuity. Merely bad brought your audience the film’s leader running by, or a blank black screen, to stare at. A horrendous one threw a shockingly bright white nothingness reflected onto people’s pupils (causing them to painfully constrict for their viewing pleasure).

And since these projectors had carbon arc light sources, made for a fairly large auditorium, a similar technology used for those old high intensity searchlights that once crisscrossed the night sky of old Hollywood movie premieres, you’re talking about one bright candle when working right.

Performing what was known in the trade as a movie changeover was essentially getting the timing right:

Basically, when you had this routine down, it was 5 minutes of work to prep everything for the next iteration. You were ‘free’ for the next 12-15 minutes till this cycle repeated itself. Every so often you kept a keen eye on the tab attached to the projector’s housing meant to monitor the arc’s brightness, and that its light remained situated between the two lines calibrated there. Other installations had this projected on the ceiling for the technician to regard.

I usually did my homework and reading during this time.

Of course, my brother also taught me about when and how to fade in/out the house lights and footlights (we had a stage), adjust the volume levels in the theater, open and close the curtains, splice film (important later), and adjust the screen masking (for standard or widescreen presentations).

By the time the last two days rolled around in my training week, all my brother was doing was watching the old TV set he had in the booth. I was doing all of the work on his shift (“…comes with the territory, bro”). So, it all came down to these facts about the job:

This stuff became so ingrained, for years afterward, I couldn’t help but critique light transitions, volume levels, and reel changeovers of other projectionists while going to the movies, far away from the theater, for my own pleasure. I still do, as my TCM Film Festival recap showed. But, I always appreciated a good job when I saw it.

Slate writer Grady Hendrix nailed the end result of this vanishing craft, as quoted by the veteran projectionist he interviewed, on those changeover cues in his article:

“You see those cues all your life.”

Truer words were never spoken. When trained to the extent available back then, I would work a shift all by my lonesome from here on out. And usually that meant, for those with the least seniority, I toiled the night/closing shifts. That, and I worked Amateur Night. 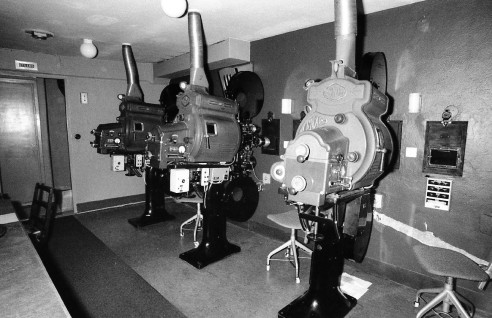 Not the H.P. Warner, but the closest photo I found that best represented the old gal’s projection booth

Previous: The Owner (Part 2)
Next up: Amateur Night (Part 4)

27 Responses to “Tales from the (Movie) Theater: Projecting (Part 3)”