I swear, with friends like John Kenneth Muir I will never ever run out of ideas to write-up posts ‘cuz he just keeps popping up with great ones through the interaction of his blog. This from Monday:

“Since our first reader top ten in May, I’ve received several great ideas for the next top ten list.

Some readers have suggested I focus on horror films, others on the greatest characters in film or television history, and others on underrated science fiction movies that didn’t get a fairing hearing in the previous list.

After considering all the information, I’ve decided to go with the following list at this time: The Ten Greatest Science Fiction Film Characters of All Time.”

I highly recommend checking out another of John’s Top Ten lists located right here. It’s an excellent tensome of iconic Sci-Fi characters. Since this is one of my favorite genres, from childhood, this cannot go unanswered. Drum roll please: 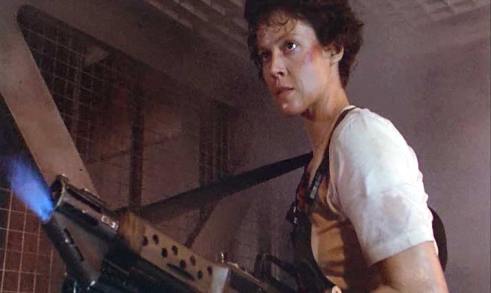 1) Ellen Ripley (Alien Quadrilogy) – John said it best for one of the greatest ‘last girl’ characters of all-time:

“Ripley makes the cut as my favorite big screen character in part because she has endured so much, and done so with such strength and humanity.  We have seen her tested in a command position (when Dallas is off the ship in Alien), embrace parenthood (in Aliens) and reckon with the inevitability of death (Alien3).”

I’d add with Alien Resurrection she epitomized badassery, too ;-).

2) Roy Batty (Blade Runner) – While some would consider him to be the villain, the antagonist, to Rick Deckard in the film, I’m of the opinion the replicant was the true hero in the story (with Deckard the antihero). Roy was always the one more like us, more human in his reactions to our mortality. “Rage, rage against the dying of the light” fit him to a tee. Reaching a point in the film where we could, or will eventually, understand all too well his epiphany that resulted in his final act.

“All those…moments…will be lost in time, like tears… in… rain. Time… to die…”

3) Sarah Conner (Terminator series) – To me, one of the great characters in science-fiction film was not the one who’d ultimately saved humanity from James Cameron’s machines, but the one who gave birth to him. It’s no surprise the key figure was not so much the hero of the tale, but the mother who taught, nurtured, and cared enough to not let the men of the world destroy it — all via their cold, unfeeling cyborg offspring. Doing whatever it took, she epitomized the sacrifice and the transfiguration of motherhood upon us all (any husband, resident sperm-donor or significant other can attest to that when they witness it, I can assure you).

4) George Taylor (Planet of the Apes, Beneath the Planet of the Apes) – The ultimate cynic in my book. The deep space explorer who will be taught a lesson on what it is to be human, even if the one teaching it isn’t, and remains one of the 60s iconic figures. Forced to see his error of his, and his species, ways via the ultimate culture shock, Taylor’s journey will be among the most memorable. In one of the greatest “twist ending”s of all time, he’s left ranting at the foot of a broken Statue of Liberty in frustrated anger that still resonates.

5) WALL•E – The long-lived, Waste Allocation Load Lifter Earth Class machine (WALL•E) evolved after 700 years of labor into a distinct sentient being. One that knows how alone it really is since it’s the last of its kind on the abandoned Earth. The machine will spark the chain reaction that liberates and literally saves itself, along with humankind. WALL•E’s selflessness to overcome the ingrained ways of others at almost every turn in the tale is what not only makes him heroic but one of the unexpectedly great dystopian characters in the genre.

6) Trinity (The Matrix Trilogy) – The real heart and soul of this mind-blowing film series was this dark-haired, intelligent, and lethal beauty. Debate all you want on the direction the Wachowski Siblings took the tale in the long run, but the most alluring, and alive, character in three films was Trinity. She’s the prime reason Neo succeeds as the hero. Admit it, without her it’s much a shorter story. When she says, “In five minutes, I’ll tear that whole goddamn building down.”, you damn well better believe her. 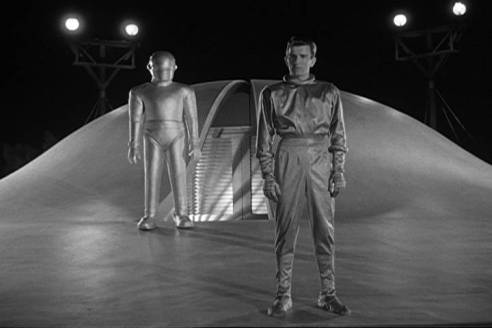 7) Klaatu (The Day the Earth Stood Still, 1959) – The extraterrestrial, with the coolest flying saucer and robotic sidekick this side of Forbidden Planet, who arrives on Earth with a sobering warning about our immature fascination with nuclear weapons and future spaceflight. Looking like us, but not acting similarly, Klaatu remains a fascinating, almost Christ-like creature of intellectual paternal guidance, and one of the most indelible characters of the 50s and science-fiction.

8) Eleanor ‘Ellie’ Arroway (Contact) – Easily, the most driven, intelligent, and passionate scientist on the third rock from the sun. The one character more intent on bringing a heart and a soul with an intellect to a journey of discovery this 90s film provided, and who you’d want interpreting an interstellar signal beaming its way to Earth. A hero with conviction, but without a weapon or attitude, armed with all the smarts, curiosity, and hope anyone could muster. 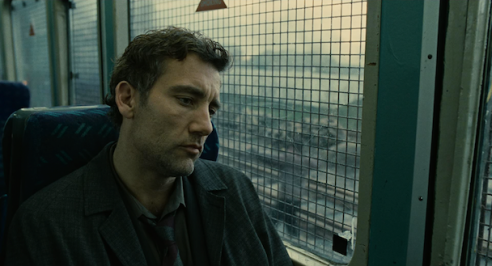 9) Theo Faron (Children of Men) – One of the seemingly lucky ones — as defined by the fact that he is a UK citizen with a job, and not one of the ill-fated refugees clamoring to stay on Britain’s shores as humanity slowly dies away, Theo is the man for an extraordinary journey. His path from utter pessimism (through the darkest of times and the loss of his dearest friends along the way) to ultimately one of hope at his, and the film’s, end remains the remarkable core of a hauntingly desperate, beautiful film.

10) Mal Reynolds (Firefly, Serenity) – Most stories, no matter if they are Sci-Fi or not, usually have a stalwart lead surrounded by colorful support characters and/or charismatic villains to play off against. Our man Mal, the Browncoat war-vet, broke the mold by being not only at least as funny, charming, or dramatic as those in the crew around him, but could go as dark or more than any of the bad guys he faced. Joss Whedon’s wonderful gift of a character to the genre’s fans.