Note: this is my submission to my Flixchatter editor and colleague Ruth and her blogging birthday celebration of a certain well-known and charismatic actor. 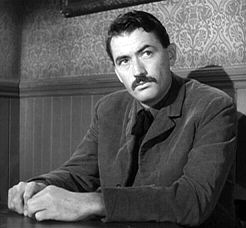 It’s not hyperbole to say Gregory Peck (1916 – 2003) had one Hell of a career in film. All kinds of movies dotted this actor’s life’s work in the cinema. From his Academy Award-winning performance as the widowed southern lawyer and father Atticus Finch in To Kill a Mockingbird, his swashbuckling Captain Horatio Hornblower, and even his General Frank Savage from Twelve O’Clock High showed a variety of roles this leading man could and did pull off on the big screen, and do it with ease, I’d say.

Still, in such a varied career it’s my belief that this handsome performer didn’t get the recognition others do when it came to one particular genre: the Western. That may be because many today disregard the Western since it a genre that no longer dominates the screen as it once did, or no longer relates well with modern audiences. Which is a shame, really. Even though, as my colleague Colin mentions, it is “… a genre widely regarded as being bound by convention“, the western did have tremendous versatility. In many ways its stories are morality plays used to express a point of view, comment on history, injustice, or serve as a platform for good old fashion melodrama.

Well known for his thoughtful roles, Peck was celebrated and associated with socially conscious characters on film or in contemplative tales. Some of which could be found in his reflective, even brooding, stints in the saddle, so to speak. Covering such ebb and flow decades for the venerable oater, Peck’s western parts spanned the 40s, 50s, 60s, and the 70s. Such work traversed over a few great, some good, and not-so-good horse operas and were scattered among that formidable filmography of his. It’s my opinion that none should missed, if you’re at all interested in looking at this man’s work as a whole. Whether the movie was top-of-the-line, B-level, or something else altogether, you never lost sight that Gregory Peck was in the film. Giving you his usual stellar effort, or just maybe delivering the unexpected.

I’ll describe briefly my thoughts on those films, and the parts, I’ve seen over the years, and include linked articles from others, especially from my western/film noir colleagues Colin from Riding the High Country and Toby of 50 Westerns From The 50s for their expert views on the subject for a number of these (and of course, watch out for Ruth’s thoughts on Peck’s lustful western début). Presented in alphabetical order: 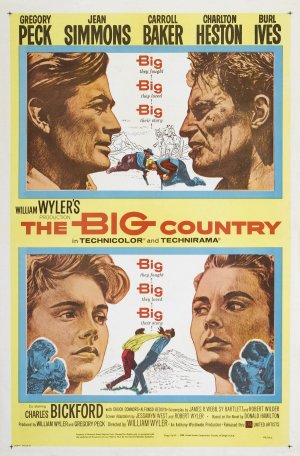 The Big Country (1958), role: Jim McKay – Might as well start off with the biggest, most grand western on this list. William Wyler’s film is considered the thinking man’s western. I like Colin’s assessment: “What raises The Big Country above a trite critique of contemporary politics and lends it a timeless relevance is the fact that it’s also an examination of man (or should I say men) and what he’s made of.” Peck has a great part in an equally great film. This one shouldn’t be missed. 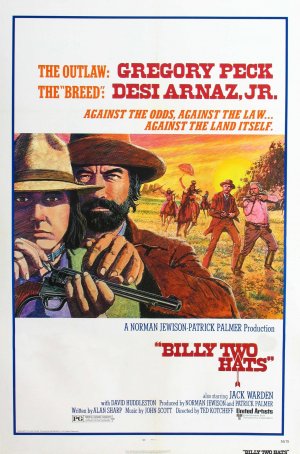 Billy Two Hats (1974), role: Arch Deans – one of the few of Peck’s I yet to watch. A heist and pursuit western, with Peck portraying a Scottish outlaw partnered with a mestizo Indian and pursued by the law. This has the distinction of being the first Western shot in Israel, directed by Ted Kotcheff and written by Alan Sharp. It’s unknown to me how well Peck performed in the part (no grade).

The Bravados (1958), role: Jim Douglass, quality of part: great – when fans talk about Gregory Peck westerns, this one is in particular is always near the top of that list. As Robert Silva wrote back in 2009: “The Bravados is one of the best psychological Westerns to emerge from the 1950s, challenging the genre’s convictions with moral uncertainty.” Director Henry King, Peck and the supporting cast certainly delivers with this one. Another extraordinary part for Peck that’s a must-see.

Riding the High Country » The Bravados

Duel in the Sun(1946), role: ‘Lewt’ McCanles  – once dubbed ‘Lust in the Dust’, this melodramatic King Vidor western had David O Selznick’s ambitions and excesses all over it. One of the earliest roles for Peck, and he plays the part with abandon as the magnetic bad boy in the piece. Controversial for its time, it provides some wicked, sensationalized fun as long as you don’t take it seriously — a favorite of director Martin Scorsese.

Flixchatter » Musings on Duel in the Sun 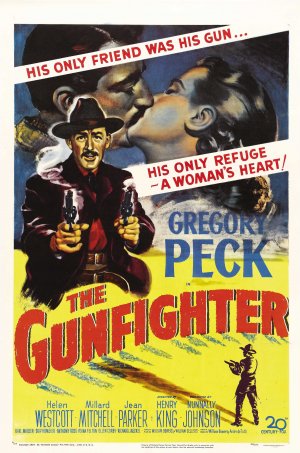 The Gunfighter (1950), role Jimmy Ringo – this is another not to be missed part for any Gregory Peck or western fan. This is the earlier Henry King film and it sure as shootin’ qualifies as an adult western that pre-dates similarly themed movies like The Shootist and Unforgiven. Peck portrays a notorious but aging gunfighter attempting to avoid the trouble that comes with a fast-draw reputation while seeking reconciliation and forgiveness. One of the great roles Peck ever played.

50 Westerns From The 50s » Bob Dylan on The Gunfighter 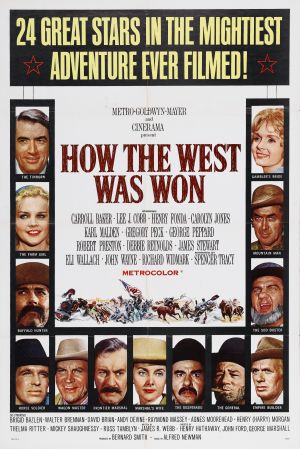 How the West Was Won (1962), role Cleve Van Valen  – this epic western saga covers the expansion of the West to white settlers, much to the chagrin of the native peoples I’d add. It is an all-star cast, large-scale production helmed by John Ford, Henry Hathaway, and George Marshall. Not the strongest in Peck’s western stints, but it’s not the weakest part, either. Still, with it widescreen Cinerama-processed grandeur, you shouldn’t must it.

Mackenna’s Gold (1969), role: Marshal McKenna  – this one is pure entertaining adventure fluff in western guise by director of J. Lee Thompson. Nefarious outlaws kidnapping our hero in search of ancient Apache gold! Gun play, greed, chase sequences, and one of the first partial nude scene in an American Western (c/o Catwoman herself, Julie Newmar), it remains one guilty pleasure (at least for us guys). Peck is solid in a part that didn’t demand much.

Only the Valiant(1951), role: Capt. Richard Lance – this is probably the second most underrated western in this lot. Directed by Gordon Douglas, this wasn’t the actor’s favorite role. Though, it is hampered by a fairly routine plot of soldiers holding out in an abandoned fort against the savage Apache natives, but Peck is more than solid in this movie part, one that has a good supporting cast to boot.

Shoot Out (1971), role: Clay Lomax – the other western I’ve not seen. Directed by Henry Hathaway, it has Peck portraying a bank robber, now out of jail after serving an 8-year sentence, looking for the man who betrayed him. On top of that of that cliché part, it’s a guy-saddled-with-a-precocious-kid story, as well, folks. I’m not in hurry to catch up with this one, though.

The Stalking Moon(1968), role: Sam Varner – this is what I think is the underrated western on the list. Robert Mulligan helmed this surprisingly suspenseful tale that has Peck as a retiring Army Scout who takes it upon himself as protector of a white woman and son long-held by Indians, and hunted by her child’s Apache’s father. There palpable dread that builds throughout this, and which plays almost like a horror film. This is one of those least-known gems and an undervalued part for Peck. 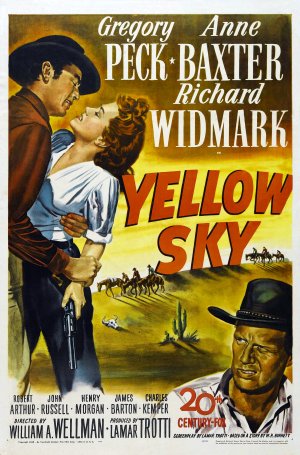 Yellow Sky(1948), role: ‘Stretch’ Dawson – one of the best by director William Wellman. This taut western tale is about the greed for gold among a gang, led by Peck’s character, who stumble into a situation where all the central characters face the inability to trust one another because of it. This has one of the best early performances by Gregory Peck, with a solid cast, in a complex work by a stylish and under appreciated filmmaker.