This is the next entry in a Theatre… a Movie… and a Time, a series that was begun here. Since I began with the Epics category with the start of my Versus AFI: 10 Top 10 arc, it was only fitting I’d chronicle a couple of them in this series.

Mr. Dryden: “Lawrence, only two kinds of creature get fun in the desert: Bedouins and gods, and you’re neither. Take it from me, for ordinary men, it’s a burning, fiery furnace.”
T.E. Lawrence: “No, Dryden, it’s going to be fun.”
Mr. Dryden: “It is recognized that you have a funny sense of fun.” 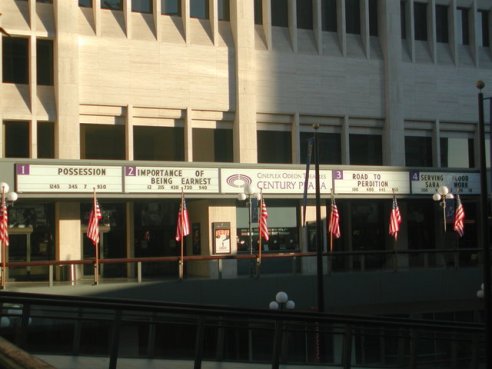 March 10, 1989: I first saw David Lean’s remarkable film, Lawrence of Arabia, like a few young people my age did: on a 60s or 70s network TV broadcast, coming out of some undersized television set at home. The experience was good, beyond doubt, but it lacked something. In no small wonder, the aspect that was definitely missing in the postage stamp environs that was my grandmother’s living room was the grandeur and scale of this 1963 epic being shown on the big screen. In 1989, the studio re-released the restored director’s cut to a handful of theaters in the U.S. capable of showing it as the filmmakers and film historians and preservationists intended. Coincidentally, the revival screening opened the week before my bride and I were to be married. The Century Plaza theaters in Century City was to be one of the sites for this back then.

Each of the venue’s 1000-seat twin halls were equipped to show 70mm films in high-tech Dolby sound at the time. And two of us just had to see this film… all 216 minutes, two parts and an intermission, of it. New wifey and me, you ask? Ah… no. Believe it or not, the other in this case was the new mother-in-law that came with the marriage. Somehow, the old battle-axe and I convinced (separately mind you… we didn’t do tandem anything back then) my new spouse to go to the screening. Just so you know, only after the bride and groom returned from their honeymoon. I’m not nuts… give me some credit for what was important here. In a word, the experience that Friday evening of finally catching this in a packed and darkened movie theater, eyes glued to a wide and large screen, was Epic.