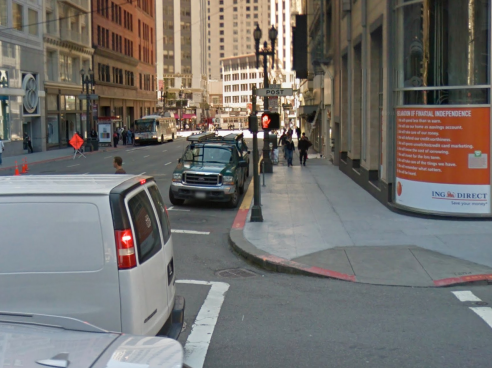 One of my NoCal compatriots, the kind, witty and definitely unpredictable individual known as @LolosLetters, may recognize the intersection pictured above by sight alone. I recently met her in person last September in St. Louis at the mystery writers convention known as Bouchercon 2011. Why I know Lauren at all is due to a certain pursuit that involves a keyboard and the excuse of being online: blogging. The screen cap of the Google Map street view is the corner of Post and Kearney streets in San Francisco. Why there? It’s the only place I’ve been to that has a ‘100 Post’ sign on it — yeah, this is one of those milestone posts, folks. Clever I’m not as I swiped the idea from my colleague Ruth over at Flixchatter for her very enjoyable 700th Post piece on October 24th of this year.

I chose the image because the signpost is part of the background, and not the focus. It’s helpful for finding your way about (and keeping track of a number), but everything around the marker remains more consequential. Back in February, I came over to this blogging platform looking for a change (though, truth be told, I didn’t expect reaching anything close to this). It’s taken this long (or short) of a time to reach the century mark in the number of posts published on it. I hit 383 posts on my old Blogger site, not counting the guess spots I’ve contributed here and there with friend’s blogs since 2008. That I’m doing this on a fairly regular schedule still surprises me.

As I noted in this post earlier in the year, the last thing I thought I’d ever do, after graduating high school especially (oh, so long ago), was writing something about anything related to film, books, or even family at any point in the future. Yet, here I am. One of the two things* that keeps the jotting going are those who give their time reading, and sometimes commenting on, this web log. The online interaction it creates remains a positive reinforcement, no doubt. And, I’m grateful for those who either stopped by once, returned time and again, and/or interacted with me on Twitter for said narrative. So, in reaching this small blogging achievement I’d highlight those who’ve helped this all by being there (or is it here?).

Certainly, I’m obliged to those who followed me over from the first blog I started to where I now inhabit: Lauren for sure, Bev of BevsBookBeat, Chris of Celluloid Moon and now Stranded Below Nirvana, Kevin of Colonel Mortimer Will Have His Revenge, the generous Ed of Edward Copeland on Film… and more, my distant cousin Poncho from Elogios, author John Kenneth Muir from his Reflections on TV/Film blog, Kaye Barley of Meanderings and Muses, the one and only Sci-fi Fanatic, Elizabeth of Musings of an All Purpose Monkey, John D. of Nobody Move!, christian of Technicolor Dreams 70, the only Pop Culture Nerd I personally know, Patricia Abbott, Paul D. Brazill, J.D. of Radiator Heaven, Colin of Riding the High Country, my duo post colleague Rachel of Scientist Gone Wordy, Christine (who staffs the overly multi-toed cat), the wonderful Naomi of The Drowning Machine, Will of The Paxton Configuration, my contemporary Jeff of Stuff Running ‘Round My Head, Bryce of Things That Don’t Suck (how true), Herb & Laura (who travel no end), and of course Jen of Jen’s Book Thoughts for getting me started in this racket.

Not to be left out, those who became friends and regulars of this location since my move (this certainly includes those who have taken the extraordinary step of following or subscribing to my bouncing between subjects on this site — if I’ve forgotten anyone, my apologies… the fault is mine alone):

I thank you all.