Film blogger extraordinaire, Dennis Cozzalio of the wonderfully titled Sergio Leone and the Infield Fly Rule site, is another of my long-time follows. His quarterly movie quiz posts are the stuff of legend. Though this year’s Spring version was passed over (something to do with piranhas and Lake Havasu), he has come up with yet another of his cinematically off-the-wall but thoroughly inspired film exams, which are really interview questions, for his readers.

Anyone interested in motion pictures is invited to take part. You can craft and paste the questions and your answers into Blogger’s temperamental comment system in the post. Been there, done that (thank you very much). Or, do as I’ve learned to do: post your answers on your own blog (if you have one) and leave a comment on Dennis’ post with a link back to your answers. So, on to the subject at hand:

The questions and my answers are after the jump.

1. Depending on your mood, your favorite or least-loved movie cliché

My least is when the director/screenwriter has the woman, girl, female character always managing to trip or fall when danger/threat/creature beckons. My favorite, though, is when the man, guy, heroic supporting character puts himself in the way of said danger slash threat slash creature as a way of protecting said female (the one he’s just told to “RUN!”, by the way).

My recent revisit with Jurassic Park had both clichés in the same scene: As Robert Muldoon (a memorable Bob Peck) and Ellie Sattler (Laura Dern, who never looked so gorgeously athletic in a movie) head to the maintenance bunker, the former game warden realizes they’re being stalked by the escaped velociraptors. He warns Ellie of this and tells her to run ahead while he prepares a valiant (albeit doomed) counter. What does the heretofore able-bodied Dr. Sattler do right after being barked at to move? Of course, she immediately puts herself on the ground by way of tree trunk, rock… whatever before getting her ass in gear. 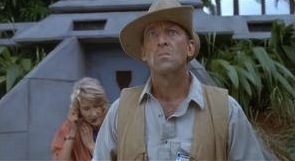 2. Regardless of whether or not you eventually caught up with it, which film classic have you lied about seeing in the past?

Edward Everett Horton. I always remember him as Mr. Witherspoon from Arsenic and Old Lace.

Cinderfella (Will Success Spoil Rock Hunter would be first)

5. Clockwork Orange– yes or no?

Yes, but it scarred me for life on eye exams.

6. Best/favorite use of gender dysphoria in a horror film (Ariel Schudson)

I had to make sure I knew what the term meant using the inter-tubes on this one. I’m drawing a blank unless you count Tilda Swinton’s archangel Gabriel from Constantine. 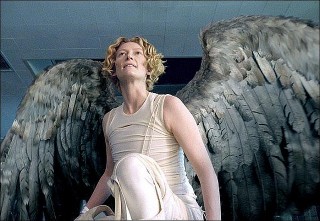 Melanie Laurent, mainly for Inglourious Basterds (plus the fact I wouldn’t watch Gossip Girl even if you paid me). 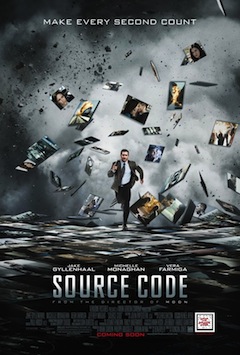 Duncan Jones’ totally unexpected mystery/sci-fi/thriller follow-up to 2009’s Moon still has me in its grip. The last time I experienced anything like that was with the very different Memento by Christopher Nolan. That tells me something. All I know is I can’t wait until David Bowie’s son delivers another film.

“How do you shave in there?” ~ Audrey Hepburn (as Reggie Lampert) while touching the cleft in his chin, Charade

How about misunderstood shithead? 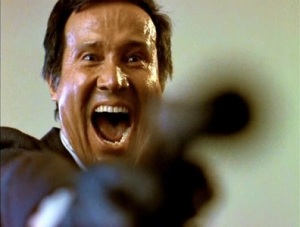 While I appreciate the unique and striking Timothy Carey, it’s really no contest for me. From movies to TV to voice work (he performed Bane for 1998’s Batman and Superman cartoon series), one of the all-time legendary villain character actors, ever, is the great Henry Silva. Okay, he did have the rare good guy role from time-to-time in things, like The Mice episode of The Outer Limits, original series. Saw him a couple of months ago on the street, and those cheekbones still command.

12. Low-profile writer who deserves more attention from critics and /or audiences

Don Winslow, and hopefully Oliver Stone’s film adaptation of his SAVAGES novel will help to change that.

13. Movie most recently viewed theatrically, and on DVD, Blu-ray or streaming

Robert Mitchum as Rev. Harry Powell in NIGHT OF THE HUNTER

Availability. That’s important for the films that have yet to make it to DVD or Blu-ray Disc (Blake Edwards’ Experiment in Terror had a run with Netflix for a bit). Plus, the side benefit are the films sometimes arrive in the correct aspect ratio, especially if that’s wrong on the retail media. Too many Region 1 discs have that fault. Walter Hill’s Johnny Handsome and Don Siegel’s Charley Varrick come to mind. Each are criminally cropped on their U.S. DVDs. Hopefully, more films will become available to streaming (only JH is streamed of those mentioned above, but only at 1.33:1 for the moment). Some, like for the highly underrated Hickey & Boggs, you really do need to use the streaming option since the VHS and DVD versions as so woeful.

France Nuyen, if for nothing else than being talented, a beauty, and for her memorable roles in Star Trek and I SPY (which influenced me no end as a kid in the 60s).

His Jack Burns in Lonely are the Brave.

John Frankenheimer’s Ronin [with thanks to J.D. for reminding me of that with his recent film review].

Marie Windsor, but I have a thing for brunettes.

20. Existing Stephen King movie adaptation that could use an remake/reboot/overhaul

It. They’re supposedly re-doing this… hopefully they’ll improve on that inane spider-thing in the TV adaptation.

21. Low-profile director who deserves more attention from critics and/or audiences

22. What actor that you previously enjoyed has become distracting or a self-parody? (Adam Ross)

Madonna… okay, who am I kidding. I’ve always hated her film work. The obvious answer would be Nic Cage, but he continues to intrigue what with the great time I had with Drive Angry. So, I’ll go with… Adrien Brody. There, I said it.

23. Best place in the world to see a movie

Given the recent upheaval with this landmark theatre, and since I live in LaLa Land, could it be anywhere else?

I’ve not seen a one (and I should fix that), but I’ve always heard great things about Tokyo Story.

How about the Devil in Rosemary’s Baby?

27. Name a non-action-oriented movie that would be fun to see in Sensurround

29. Favorite relatively unknown supporting player, from either or both the classic and the modern era

Since Breaking Bad returns for its fourth season next month, that would be Giancarlo Esposito. The man is great in everything he’s in.

“What does a man do, Walter? A man provides. And he does it even when he’s not appreciated, or respected, or even loved. He simply bears up and he does it. Because he’s a man.”

30. Real-life movie location you most recently visited or saw

The Tall T (my favorite remains Seven Men From Now).

I’ll go with Linda Darnell for the block, Peter.

34. What’s the biggest “gimmick” that’s drawn you out to see a movie? (Sal Gomez)

From way back when, it was Sensurround for Earthquake. More recently it was due to James Cameron’s 3-D tech in Avatar (which is almost unforgivable today with what studios are shoveling upon us in poor follow-up).

35. Favorite actress of the silent era

I can only answer with Lilian Gish. 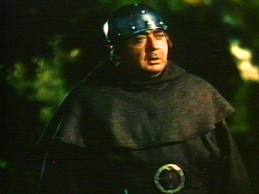 38. What could multiplex owners do right now to improve the theatrical viewing experience for moviegoers? What could moviegoers do?

Moviegoers: texting below seat-level is still texting — stop it! 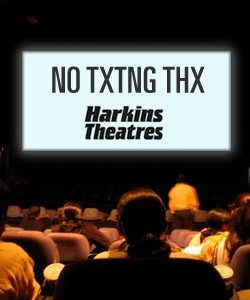