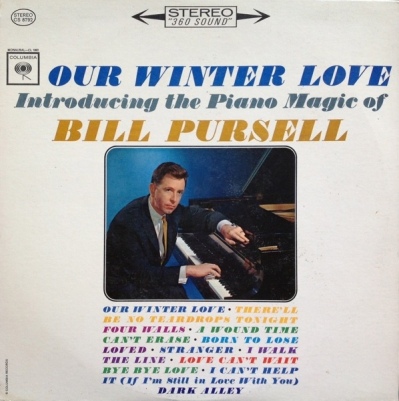 You can ask my kids about this fact, but I have a soft spot for the old music instrumentals that were once more common on the radio and music charts back in the decades of my long-lost youth. One of my long-time favorites, from 1963, was the Bill Pursell performed Our Winter Love. It endures as a hauntingly beautiful melody, IMO. Outside of the Percy Faith’s version of Theme from A Summer Place, it remains the one instrumental tune I most fondly associate with the ’60s.

If my eighth grade music appreciation teacher were still around, she would soundly attest that I’m no music expert. That’s for sure. But, I know what I enjoy. While they both deploy their orchestral strings to sweet-sounding use, these pieces served a wonderful counterpoint to each other as they play out. That each song has a polar opposite season as part of their title also helped to establish that point, I think.

If nothing else, it is a bit of additional icing to enjoy about them. So popular were both of these hits, the close-harmony group, The Lettermen, covered both of these songs (with lyrics) in 1965 and 1967, respectively. As best as I could research, the tune was written by Johnny Cowell and arranged by André Kostelanetz, Lawrence Welk, Bill Pursell, and Hugo Winterhalter. The good folk over at 60s70sTheBest channel covered it further back in 2013:

“”Our Winter Love” is a piano instrumental remake by Bill Pursell of a song written by Canadian songwriter Johnny Cowell. The song ultimately became one of the biggest selling recordings of 1963 and has carved out a small but meaningful niche for itself in the annals of pop history. Initially, a trumpet solo demo of the song that was titled “Long Island Sound” by Johnny Cowell, was sent to Nashville to be recorded by well-known trumpet player Al Hirt who never recorded it. Pursell came across it one day and transformed it into a timeless classic. The song reached #9 on the pop charts, #4 on the adult contemporary charts, and #20 on the R&B charts.

Pursell attended the Eastman School of Music in Rochester, New York.and could have become a famous composer and concert pianist. However, after a stint in WWII, he wound up as a session musician for top performers in Nashville such as Boots Randolph, Chet Atkins, Marty Robbins, Patsy Cline, Eddy Arnold, and Jim Reeves. Years later, Pursell was named Composer of the Year by the Tennessee Music Teachers Association In 1985, and he is a member of the faculty of the School of Music at Belmont University in Nashville. He also completed his Doctor of Musical Arts degree at Eastman School of Music. Through the years, Pursell never met or had spoken to songwriter Johnny Cowell, however, he has credited Cowell as the song’s sole composer. Sit back, turn up the volume, and get caught up in the simplicity and emotional solitude of the song’s haunting melody.”

Our Winter Love was considered a major hit, reaching #9 on Billboard’s charts, for Columbia that year. As reported by Wikipedia, Bill Pursell afterwards “…worked as a session musician and arranger for Patsy Cline, Johnny Paycheck, Hoover, Joan Baez, Eric Andersen, Scotty Moore, J.J. Cale, Willie Nelson, and others.” He is currently on the School of Music academic faculty for Belmont University in Nashville, Tennessee.

And if he reads this, I want to assure him that this song still has admirers and will not be forgotten by the likes of us — me, in particular.

Editor’s note: I was overjoyed when Bill Pursell commented on this post back in September of 2016. And just as sad when I learned of his passing from COVID-19 this year. May he rest in peace.