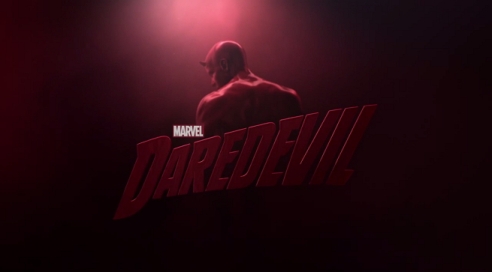 Having just completed Marvel’s DAREDEVIL Netflix series, color me mighty impressed. Little wonder my colleague from down-under, Rodney Twelftree of Fernby Films, praised it so last week. As did Ruth of Flixchatter in this one. Recommended reading both. With each episode watched, the more I was drawn in. Glad I got JUSTIFIED out of the way before starting this. Helped me through the early stages of my Raylan Givens withdrawal.

Perhaps, should have stretched this out as I’ll have to wait another year before I hear again from Matt Murdock…it’s a conspiracy, I tell you.

Delving into the series with both feet, DAREDEVIL’s remarkable opening sequence went beyond its eye-catching color. The mesmerizing main title by the imaginative filmmakers at Elastic eerily played out the arc of its first season in a New York minute. This from the same folk who did an extraordinary one for HBO’s initial season of True Detective. No doubt, primed by their use of a saturated motif upon a corrupted landscape.

Red being the most emotionally intense color, it’s tailor-made to usher in Marvel’s series since it makes liberal use of blood and breadth. DAREDEVIL was nothing if not first and foremost a storyline built upon those chief ingredients. As ComicBookMovie.com noted in their recent interview of Stephen DeKnight and Jeph Loeb, the showrunners were convinced upon first seeing Elastic’s graphic presentation for the credits:

“We had multiple companies come in and pitch, and they all had variations of the same idea, where you zoom in on an eye and you see a sonar map of the city,” Showrunner Steven Deknight said before revealing that they decided to go with a different idea for the title sequence. “Elastic, came in and had multiple pitches, and one of them was to have this dripping, fluid-like blood dripping over everything. Jeph and I sat up, like an electric shock, when we saw that. You’re always very polite in the room, but when they left, we were like, ‘We’ve gotta do that one!’ Then, we showed it to Marvel and Netflix, and they loved it.”

Truly, an outstanding sequence, unquestionably given another leg up with Joe Paesano’s haunting theme music. Like something masked, the invisible dimensions of the story are slowly revealed via a liquid scarlet poured down upon obscured objects. Disclosing a depth heretofore unseen. Lady Justice at the forefront, slowly uncovered through the mysterious rubicund spilt upon her face and scales.

Much like the blind hero re-introducing the concept via fists and feet to his end of Hell’s Kitchen.

In Elastic’s composition, the glutinous overflow unrelenting. The dripping crimson uncovering every borough edifice along the way. The series coming across the Five Points like it was streaming from a free-flowing wound. There’s just no stemming it. A hazy red mist draping across the newly revealed cityscape by the sequence’s halfway point as the symbol some hold sacred comes into view. The Cross that bears both sin and redemption.

Designers posit the church’s rise from the cardinal viscid against its seeming counterpoint — the horns of a devil as the recognizable figure blossoms forth. Yet, the various articles in the sequence are all of the same color. Therefore, interconnected…one and the same. Each given equal weight in the graphic scheme of it all. The good and the bad. Everything built on blood, fashioned upon it, in fact. Justice, the city, and the incorporeal both wrestle with.

The stylishly sanguine introduction makes that clear…for it’s in our veins, ultimately.