This is the next entry in a Theatre… a Movie… and a Time, a series that was begun here. It’s no secret, Joe Dante’s Trailers From Hell is a frequented site of mine. One of my preferred ‘Trailer Gurus’ is screenwriter Josh Olson. He wrote the screenplay for another favorite, A History of Violence, and has MC’d a number of American Cinematheque’s revival screenings I’ve attended. Even offered a comment on this blog. His take of the violent, highly controversial film of Sam Peckinpah’s the motivation for today’s memory download. 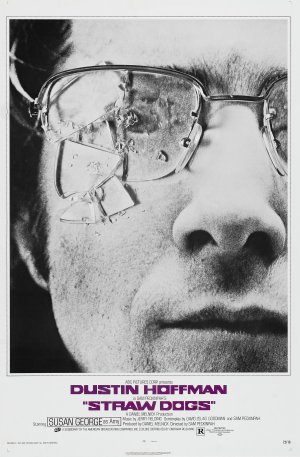 January 1972: I’ve mentioned obtaining my driver’s license at 16 was one of independence and getting out of town. It also meant I could finally prove my age. The ability to grow a mustache since ninth grade was only cool to a fleeting extent. ID cut both ways, though. “Getting carded”, a saying not around when I turned 17 in the summer of ’71, threw up temp barriers for alcohol or getting into a strip joint. The latter existed on nearby Long Beach Blvd., which we’d even duck into it for quick peeks, before being chased out.

A class of young males wholly unprepared for maturity, let alone dates. So the next best thing for us, without internet, DVD…hell, VHS tape, was watching risqué movies. We certainly couldn’t get into the Lyric Theatre, the “adult” movie venue in Huntington Park at this age. The result? On the prowl for a certain kind of film, whenever it hit local movie theaters.

Only demanding the story hurry up and get to “the good parts”.

Sam Peckinpah’s Straw Dogs had my relatives debating after they’d all seen it. My aunts not really liking it. Their husbands diplomatically calling it “interesting” when in the same room with them. This immediately put it on my radar now that I didn’t need to be “…accompanied by parent or guardian” for such fare. The Huntington Park Warner Theatre screening it after South Gate High’s Christmas break. I’d check off the nudity, sex, and violence boxes in my mind’s scorecard afterwards. Coming to a startling realization:

“Hey, that’s Dustin Hoffman, the guy from The Graduate. The one who screwed Mrs. Robinson.”