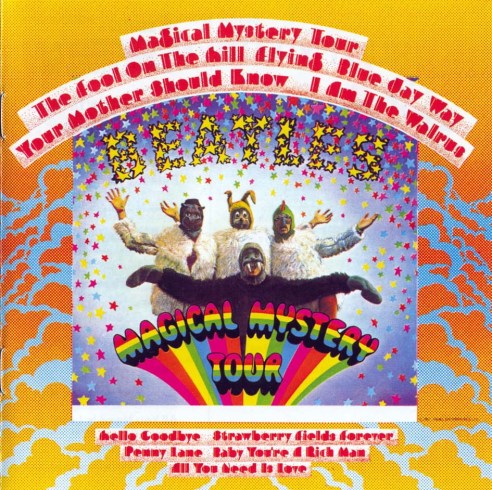 Magical Mystery Tour
The Fool On The Hill
Flying
Blue Jay Way
Your Mother Should Know
I Am The Walrus
Hello, Goodbye
Strawberry Fields Forever
Penny Lane
Baby You’re A Rich Man
All You Need Is Love

My thoughts about the album cover art aside, in 1967 The Beatles wrote and directed a TV film for a BBC broadcast at Christmas. For its American release, Magical Mystery Tour included the six songs from the British EP soundtrack on one side, and paired with singles on the other. The latter U.S. configuration eventually incorporated as official in their discography.

My Only: I Am The Walrus. For this trippy album — and I concentrated on the original songs specifically for the one hour British TV program — I’ve selected this hallucinatory and demented track by John Lennon. Brimming with audio layers, sound effects, and phantasmal vocals throughout, it is one of a kind. It’s the perfect example of their work in the short film, and the psychedelic late-60s.

My One: Baby You’re A Rich Man. Just about the whole B-side of the album was released as a hit single. Hello, Goodbye, Strawberry Fields Forever, an All You Need Is Love. And I daresay Penny Lane is heard more now on Oldies radio than back then. Yet, it’s this other Lennon tune, especially its distinctive clavioline, that truly marked Baby You’re A Rich Man as the one that needs more play today.

3 Responses to “Reprise » My Only and One: Magical Mystery Tour”