A Christmas Story was one of those rare cinematic joys that was lucky enough to have a second life. In the bargain, it would become a true holiday classic. For most, anyways. Director Bob Clark crafted a film adaptation of Jean Shepherd’s autobiographical tome, In God We Trust, All Others Pay Cash, that crackled with the author’s well-defined humor, yet still managed to warm the heart. Much like a yuletide log on the fire.

Perhaps, with the faintest whiff of turkey dinner, which won’t find purchase with the family that cooked it, to pass along a Christmas cheer.

Like all exemplary films, it did this with a combination of an unexpectedly great story that somehow registered with those watching, along with some fine actor performances. To say nothing of its direction, and that most rare of qualities. The resonance between its filmmakers and audience. Among the few Christmas holidays movies I, and my kids, watch annually, this one rarely misses a rotation. No doubt because, like most everyone else in this country, we have cable.

Set in the 1940s, in the weeks before one fateful Christmas day — for what has to be one of cinema’s quintessential American nine-year olds — Ralph Parker begins his grand, albeit tactical, scheme to convince his parents to gift the one thing he prizes most. An official “Red Ryder-carbine action-200 shot-range-model-air-rifle.” My mother would have disdainfully called this a “bb-gun”. Mothers are universal. She shared a lot of Ralph’s mom’s sentiments.

“You’ll shoot your eye out!”

Boy, does that bring back the memories. And with that phrase, old Jean Shepherd and Bob Clark, along with their co-scriptwriter Leigh Brown, began the connection for the audience’s holiday journey with the family Parker.

Along the way, specifically through a boy’s solitary eyes and ears, Ralph’s travails with family, school (and the social miscreants that haunt it), the unique traditions and trappings of this religious, and marketer’s wet dream, holiday was crystalized on celluloid. Moreover, as another superb film, It’s a Wonderful Life, could only take place in Bedford Falls, NY, this movie had to come about in its northern Indiana setting. Okay, that’s Cleveland Ohio stepping in as the fictional town of Hohman. So?

Its rust-belt locale only added to the fun with its wintry Midwest perspective and customs. Hey, this SoCal native has never shoveled snow, but for this film I’d lend a hand for the holidays. Tag on to the festivities the cinematic device of Shepherd himself providing the essential, recognizable voice-over of experience in the story. His childhood thoughts, along with his pathos and sentiments of that era, set off the tale like nothing else. You wind up with a unique, though roguishly gleeful, mix. 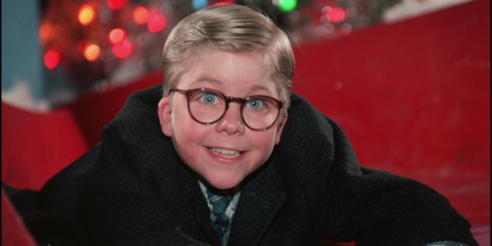 Without a doubt, Peter Billingsley gave what was perhaps his best film performance ever as the kid named ‘Ralphie’. A role most people who’ve seen it will forever link him to. Hard to imagine someone else blurting out his one true desire in a lightning fast sentence to his mom. Only to register in the next split-second it was the worst thing he could have possibly said. His quick recovery, however heroic, could not stem the predicament already heaved upon him.

It’s all etched on Billingsley face, to the point it’s forever tied him to the character.

I reckon only one child actor could have pulled it off. He may not have been used in many productions since this movie, but his innate precociousness was pitch perfect in the film. Since he was one, he brought a kid’s depth of feeling to the role. With a gusto that only added to his performance and ultimately this cast, I think. Had such a banner day that in all likelihood will follow him for the rest of his life. One can only hope that remains a good thing.

“My mother hadn’t had a hot meal for herself in 15 years.”

The underrated Melinda Dillon was equally up to the task as the mother Ralphie had to win over in his yuletide plan. His loving nurturing nemesis. Whether she’s chastising Ralph with the classic ‘mother-bb-gun-block’, or using her wiles — her use of a pig as a hilarious example to motivate his younger brother Randy to eat dinner was to die for — she’s one special parent. I know I’d only have to look to mine for similar feats of maternal subterfuge. She was another of the genuine characters in the movie.

While it’s Ralph’s story, as is almost always the case, it’s the mom that holds the family (and the holiday) together — despite efforts by her oldest child, along with her husband.

“My father worked in profanity the way other artists might work in oils or clay. It was his true medium — a master.”

It’s my assessment veteran character actor Darren McGavin almost stole the show with his portrayal of the “Old Man” in A Christmas Story. Maybe it’s just an unwritten law, or in the genes, but it’s dad who strikes fear in his sons. Challenging his wife with his poor artistic propriety, while he’s add it. Same in my house, I fear. However, he’d also be the one to rescue his eldest from a “pink nightmare”. Saved Christmas dinner via his Chinese option, too.

Compared to the time when I first experienced this movie, McGavin’s figure made an impression on this young man. As a father of a pair of teens now, I’ve come to believe it’s our duty, or our lot, to follow in those gruff though kind footsteps. It comes with the job. Maybe a gift.

Perhaps, Old Man Parker was a tad stereotypical. The grumpy, but merry, father. Wish I had had one of those. Still, it was another of the successes this movie held dear. Even beyond these three central personalities, all in the cast were great in their character roles, no matter how small. And each was given a moment to shine. From Ian Petrella as Ralph’s little brother Randy to Zack Ward as the bully Scut Farkas, they were all consummate in their deliveries. 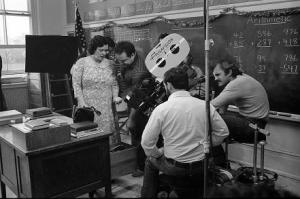 “Died with his son, Ariel Clark, in a head-on crash with a vehicle that steered into the wrong lane (April 4, 2007); the driver of the other car was later charged with driving without a driver’s license and while intoxicated.” ~ IMDB

This brings us all back to the late-Bob Clark. The man who helmed this film with a steady, seasoned hand. Who’d have thought the director who brought to filmdom the likes of the ‘Porky’s’ movies and ‘Rhinestone’ could bring a holiday classic to life? Yet, Bob effectively conveyed all the traditions, and anxiety, of the holiday. Distinctly and comically, I might add. No doubt, it was a fine edge his movie walked, fearlessly. Its jaded take on holiday commercialism forceful, yet it never lost the author’s core sentiment with the material.

Bob Clark’s attention to detail, undoubtably with the time and place, and Jean Shepherd’s singular characters portrayed onscreen, remain spot on. At least in this viewer’s eyes. As we reach its 30th anniversary — the film made the National Film Registry last year, in fact — it speaks to the director’s effort and his movie’s lasting impact. Although, that should not surprise those who know he was the same director of such underrated and notable fare like the suspense classic Black Christmas, and the dramatic mystery Murder by Decree.

Like this film, they are all favorites of mine.

When this movie was initially released on DVD in 1999 by Warner Studios, in the wake of its VHS entry to homes in 1984, it was bare bones. However, the studio rectified that this on its 20th anniversary special edition disc of the film. Its cleaned up print a beautiful picture once more. A Christmas Story now imbued with an insightful commentary track by Clark and Billingsley certainly worth a listen. The new 30th anniversary Blu-ray now restores all of the features left off of the initial 2008 high-def disc.

While it opened #1 at the box office the weekend before Thanksgiving in November of 1983, a big commercial success it was not. Much like another classic holiday film (It’s A Wonderful Life), later repeated TV/cable viewings brought it deserved recognition. From its load of quotable lines to its identifiable family quirks and seasonal habitude, it had much to relate to. Certainly seeing the film on the big screen, it was easy to recount the Ralph in me at that age. Later, via the small screen, the Old Man that’s me now with my family, I learned to treasure it from a fatherly perspective.

And it’s that resonance, I firmly believe, that made it Bob Clark’s best.

“Next to me in the blackness lay my oiled blue steel beauty. The greatest Christmas gift I had ever received, or would ever receive. Gradually, I drifted off to sleep, pranging ducks on the wing and getting off spectacular hip shots.”

9 Responses to “Bob’s Best at 30: Our Holiday Treat – A Christmas Story”