The blogger otherwise known as the Scientist Gone Wordy and I return for another go at this duo post series for ours. This time wandering back to the science-fiction genre, which dawned it all anyway. Setting our telescopes on the one person who made the word ‘Cosmos’ join the vernacular of the 80s. As Wikipedia described him, the novelist also happened to be an “American astronomer, astrophysicist, cosmologist, author, science popularizer and science communicator in astronomy and natural sciences“. His name was Carl Sagan.

Known to many for his PBS miniseries, sourced by his wildly popular science book, it drew the curiosity of viewers in the millions worldwide. In fact, Cosmos: A Personal Voyage was the program that in turn transformed another cardinal number into the pop culture catchphrase (“billions and billions“) of the time. His science-fiction book, Contact, involved, natch, the contact between our Earth-bound human civilization and extraterrestrial life, became a 1985 national bestseller.

As usual, my colleague will examine the standalone novel later adapted to film twelve years later, which I will review. Rachel’s book review can be found here:

A brief synopsis of the film: Dr. Eleanor Arroway has a career job perfectly suited for her talents. “Ellie”, a radio astronomer, has long been interested in life of the most faraway lands imaginable — those on extraterrestrial worlds. Fostered since childhood toward such things, she’s a passionate, if frustrated, advocate for science and the wisdom for this type of search. So, when a distant radio transmission arrives on Earth, from the vicinity of the star Vega, Ellie and her devoted colleagues find vindication in separating the signal from the noise, and the skepticism. But, a coded message lay within the broadcast, an invitation. An extraordinary one, which will take a leap of faith, as it were, to accept.

“I know you must think this is all very unfair. Maybe that’s an understatement. What you don’t know is I agree. I wish the world was a place where fair was the bottom line, where the kind of idealism you showed at the hearing was rewarded, not taken advantage of. Unfortunately, we don’t live in that world.”

I’ve probably seen Robert Zemeckis‘ film Contact at least a half-dozen times now since its initial release in 1997. Always picking up something new with each subsequent screening. What was found this instance, you ask? It was catching the reference of which Space Shuttle was in orbit at the time Vega’s signal was first intercepted. It was the Endeavour. That would be the same one that cruised our city’s streets last year on the way to its new home. It’s all in keeping with a film that still fascinates me.

I’ll admit, I’ve been overly critical of Robert Zemeckis ever since the Y2K rollover. Perhaps it was his over reliance on computer effects in some of these productions. Maybe it was the questionable projects that drove it. Or, trying out a type of animation that marked some of his 21st century films and made me think I was watching dead people walk about, way before everyone and their mother put out a zombie film. I’m being too harsh, I know it. Criminy, we all know you can never have too much of Tom Hanks. Who am I trying to convince?

Compare his recent films to 1997’s Contact and something becomes apparent. A few of us think the latter stuff pales. What came next for Zemeckis after this movie? What Lies Beneath in 2000. I rest my case.

The adaptation of Carl Sagan’s first fictional novel was one of the rare cases where the film gave the source material a really good cinematic turn. Carl, ever the teacher, layered his book with so much fact, along with an absorbing idea of how actual contact with extraterrestrial life might happen, to be truly intriguing. Sufficiently, I suppose, to make his conjecture a must-read among science enthusiasts and laypeople, which I finally did before this most recent revisit. Zemeckis and crew may have done it one better by distilling the book’s essence down to a two and half hour movie experience.

It’s certainly a journey film, that’s for sure. One worth taking, you ask? For Sagan’s initial idea of it all, I’d say yes, but YMMV. It gave a surprisingly even-handed debate on religion and science, faith vs. reason in the bargain. I’d commend writers James V. Hart and Michael Goldenberg for their translation to the screen. Yes, there are special effects galore employed in the film (Zemeckis’ intro for the film surely a worthy effort), but these don’t distract, for the most part. Ultimately lending themselves to telling a good story than being something so fecking cool to look at (reading Irish crime of late has affected my speech, I fear).

Looking back on both the novel and film, I can spot the significant changes, cuts, and compromises made in this adaptation. Not a surprise really, but I was more taken with the director’s and writers’ approach with the source material this time around. Certainly, when it used the political terrain of the time to condense the tale around to frame it within Bill Clinton’s administration. Locking the film into a point in time that, back then, could have been seen as a detriment as soon as the Presidential Election year of 2000 clicked into view.

Now, I’d say that was a blessing. Hindsight, go figure. Yeah, I’ll be mixing tone and terms in this review. So? Just another fascinating element. The screenplay also promoted Occam’s Razor as a crux in the tale to skewer not only Ellie’s counterpart (and love interest) but also the protagonist herself by the same logic in the course of her passage. Besides, any fan of the Pirates of the Caribbean would surely realize the principle, the ‘razor’ used to remove the unwanted, was in any case (paraphrasing)

“…more what you’d call “guideline” than an actual rule”

That said, the film, like the source, offered a wonderful zeal when it came to the science on display to bolster its speculative fiction. The film surely attempted to stay as grounded in the real world as the novel — Arecibo Observatory, Puerto Rico and New Mexico’s Very Large Array in Socorro put to great effect. But especially so when it came to the behavior of the characters, both good and bad. With a cast as well endowed as this — Matthew McConaughey, James Woods, Tom Skerritt, William Fichtner, John Hurt, Angela Bassett, and David Morse — how could it not?

Of course, Contact lives or dies for the movie viewer with its star Jodie Foster. If you don’t buy her as a driven, intelligent, and passionate scientist, then it’s not going to work for those watching…terrestrial or extraterrestrial. I’d say she pulled it off. Although, the parallels with her quintessential role from eight years earlier, Silence of the Lambs, seemed a tad heavy-handed in this production. An aspect filmmakers certainly ‘tweaked’ from that of the material.

Let’s count them off, shall we? Orphaned care of a widowed, loving father who happens to die early. [check] She’s an attractive, fiercely astute, and relatively young woman battling her male cohorts in field she’s less than welcomed in. [double-check] Helped along through the minefields byway of visits with a genius-intellectual renegade slash benefactor. No, not Hannibal, but a S.R. Hadden — John Hurt chewing scenery as good or better than Anthony Hopkins as Lecter. It seems pretty clear, doesn’t it? [triple-check]

It only got better. Give her a Jame Gumb to overcome — Tom Skerritt taking full advantage of his covetous characterization of prickly (or should we just drop the ‘ly’?) David Drumlin and James Woods’ scheming Michael Kitz as this version’s Paul Krendler nemesis and we’re almost set. Finally, have William Fichtner pose as her steady confidant Ardelia Mapp — believe me, it works here — and you could easily map this all out so anyone mistakenly calling our heroine Clarice wouldn’t raise an eyebrow. 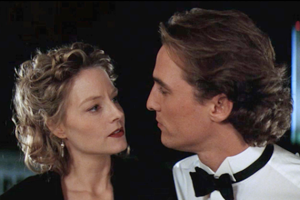 I feel that harshness creeping back in. It shouldn’t as I have a distinct fondness for the creative Zemeckis intervention in this Sagan story. It really did play more spectacularly across his big screen instead as described on Carl’s page, even if it was in condensed form. The shift of Palmer Joss as Ellie’s romantic interest even offered a better science vs. religion context and contrast care of charismatic early work by Matthew McConaughey, too. As a whole the film remains an engaging enterprise care of the craft employed by a director (on a roll before the wheels came off) and a great cast that delivered on an unexpected tale, even all these years later.

Perhaps, Contact was not what genre fans would describe as typical science-fiction fare. That would be a good thing. The quality movie fans have come to expect from Hollywood of late not close to tipping anybody’s ‘thinking’ meter, particularly for adolescent males. Little wonder Sagan deployed a smart woman as his protagonist to lift the story’s caliber.

No sinister aliens (acting more like humans all too often) in conquest for land and resources. Plucky Earthlings with ray guns (or light-sabers), you-know-what implanting chest-bursting embryos, or writing inane malware for upload to an alien mothership (yeah, I looking at you Independence Day) being the expected need not apply here. No, this film seemed more intent on attaching a heart and a soul to an intellect for a journey of discovery. This work more a character study, primarily through Ellie, of those on the receiving end of a radio transmission from the stars, weighing hope vs. fear in reaction. The gist being (re-tasking a quote from another sci-fi film):

“You have to look with better eyes than that.”