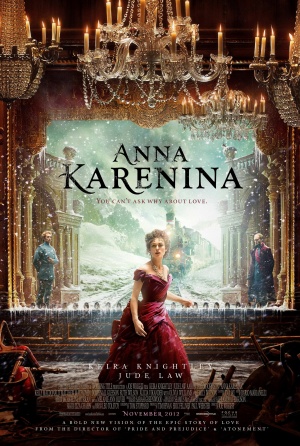 It’s my distinct pleasure to welcome back Ronan Wright, the blogger and editor of the site Filmplicity. Back in January, my friend wrote a wonderful piece for readers and fellow bloggers to start the year. Now that it’s drawing to close, and quickly I might add, it’s great to host his return. You can follow Filmplicity on Twitter and/or subscribe to his site via RSS or Email.

Leo Tolstoy’s drama set in Imperial Russia towards the end of the 19th century is given new life in an arty adaptation from Atonement and Pride and Prejudice director Joe Wright. Anna Karenina stars Kiera Knightly as the wife of a government minister who is overcome by her attraction to a young soldier. Throwing caution to the wind she embarks on a passionate extra-marital affair.

As the film plays out, Anna continues to indulge her desire allowing her passion to rule her until she is disgraced and cut off from her husband and son. Unrepentant, Anna continues her affair, scandalizing her fellow aristocrats until it causes inevitable trauma to those close to her. By the end of the film she is miserable and alone with her despair.

Anna Karenina seems to me a rather tragic character. Not simply because of the disastrous situation she eventually ends up in but because she so obviously has an equally disastrous understanding of what love means. And what it means to love.

C.S. Lewis writes, in Mere Christianity, that love must be allowed to develop beyond the sensual. It must grow into something more meaningful than emotion. If it is not allowed to grow from the initial impulse into a more concrete kind of love, into a daily decision, it withers and dies. Desire can indeed help to make people better lovers. Desire must certainly not, Lewis insists, make lovers worse people.

‘The most dangerous thing you can do’, says Lewis, ‘is to take any one impulse of your own nature and set it up as the thing you ought to follow at all costs’. But being in love is a good thing; it can make us want to be better people, nothing wrong with that surely?

‘Being in love’, Lewis continues, ‘is a good thing, but it is not the best thing. There are many things below it but there are also things above it. You cannot make it the basis of a whole life. It is a noble feeling, but it is still a feeling’.

I have to say I really think Lewis has a point here. This can be hard to swallow, especially if you’re still in the raptures of the “honeymoon period” of a marriage. But as any honest married person will tell you, this does not last. It cannot last. Lewis has a pretty good idea as to why this is.

‘Now no feeling can be relied upon to last in its full intensity, or even to last at all. Knowledge can last, but feelings come and go. And in fact, whatever people say, the state called “being in love” usually does not last. But, of course, ceasing to be “in love” need not mean ceasing to love. Love in this second sense – as distinct from being in love – is not merely a feeling. It is a deep unity, maintained by the will and deliberately strengthened by habit; reinforced by (in Christian marriage) the grace which both partners ask and receive, from God’.

This is all very well and good. But as a married man with a wife who (quite rightly) expects her husband to be passionate and at times impulsive, trying to get away with saying “love is a decision dear, not a feeling!” without having to wear my dinner, can be rather tricky to say the least.

If you want a metaphor for the difference between desire and authentic love, I suppose I would say that passion is, like heat from a roaring fire, an enjoyable effect of our God-given impulse to love and be loved. Just as our impulse to stay warm nurtures our desire for warmth and security.

But desire on its own cannot keep a fire going when things get a bit draughty. You have to brave discomfort and throw some more coal on there. You have to get your hands dirty and be prepared to get out of breath blowing on the embers!

I think the same goes for authentic love and the feelings that come with it. It doesn’t make sense to expect our feelings, however intense they might be, to keep us warm when the passion inevitably burns itself out. If anyone expects this before they get married I’m afraid they’re in for a rude awakening. When you confuse love with desire all you can realistically expect is disappointment.

Anna Karenina ultimately discovers this in her own story. It’s not what I would call a ‘feel good film’ but it did leave me with a feeling that love must naturally be something that feels good but that can’t altogether be felt.

10 Responses to “Guest Film Review – Joe Wright’s Anna Karenina: The cost of desire and the value of authentic love.”