In her eye-opening essay, The Post Noir P.I., initially published in 1996 for the Film Noir Reader (an anthology of compositions I think should be on the bedside table of any fan interested in the genre, by the by), Elizabeth Ward made the case for what became of the private detective story in film during the pivotal decade of the ’70s. It remains the piece of writing on the subject I recommend to anyone who says they enjoy noir, be it written for the page or the cinema.

The pair of films Ms. Ward spotlighted in her article, and one released a couple of years later that friends have convinced me belonged in the set, went on to show the ‘black film’ (what the term film noir means in French) was not limited to the night, or the black & white world of shadows and high contrast. Or even the ’40s and ’50s.

This summer, I screened the three feature films in succession right after my birthday. And they proved to be a triple-feature tailor-made for the hot season and the dark genre. Not to mention, besides their stellar casts, each film made distinct use of the classic noir setting of Los Angeles as its own unmistakable character. A sun-drenched venue each shamus had to deal with in their noir-inflected stories.

“Film noir has often used the character of the male private investigator to illustrate the alienated and paranoid nature of men in postwar America. As detectives these men become involved in dangerous situations that they feel compelled to control and change while attempting to reestablish morality in a world that appeared to ignore it. After the classic period of film noir, the private detective still remained an occasional protagonist in a traditional mystery film. Only a few times in the post-noir era of the 1960s and 1970s did filmmakers evoke the noir sensibility through the “p.i.”” ~ Elizabeth Ward

How true. Given the amount of upheaval that occurred during the first of half of the 1970s alone, I think those few who tackled the private eye neo noir of the modern motion picture era couldn’t have picked a better time to do it in. Or a more appropriate style to show the disruption in the U.S. that came with it. For those either born later or missed their wake-up call entirely, let’s tick off some of what happened from 1971-75, which covered the span of the three films in question, shall we?:

And that was only a smidgen of what happened inside of those five years. When you want to talk disarray, it’s the ’70s that is its poster child, folks. Yes, I’ve called attention and shaded it toward the dark side of things, but that is the subject at hand. By the way, the microprocessor, the foundation of all computing, and just about anything electric these days, was also introduced (along with the floppy disc) early in this same period. Feel better now? Okay then. As I wrote a short while back, covering another venerable genre:

“While I’ve wandered into crime/mystery literature of late, I feel that style of writing has a kinship with the western. Like the venerable oater, crime fiction shares similar core motifs of “love, danger, and death”. Honor and a code of ethics can also be attributed to both. Each of these categories has a tremendous versatility in their morality plays to express a point of view and comment on history and injustice.”

So, what are these movies authors like Elizabeth Ward and Duane Swierczynski think epitomized the “… self-consciousness of the history of film noir”, along with this period of time? A trio of films that symbolized the corruption and disruption that left many feeling powerless, weak, and helpless. In chronological order of their release (though not the order I watched them recently):

“While the detectives of Hickey and Boggs share the independent spirit of their earlier counterparts, they differ in the extent to which they can control their situation. Through ten years, the film noir protagonist had steadily lost any ability to effect change in a modern world, and this increasing powerlessness is a correlative of diminishing social morality. This powerlessness is sardonically expressed by Frank Boggs when he says, “I gotta get a bigger gun. I can’t hit anything.” ~ Elizabeth Ward

This is another of the forgotten crime gems of this decade I’ve commented on more than once on this blog. Written 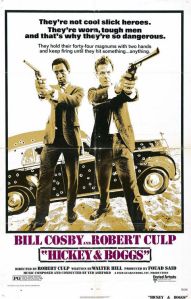 deftly by Walter Hill and directed by Robert Culp (co-starring with his I, Spy colleague, Bill Cosby) Hickey & Boggs (1972) is likely the least remembered of the set. The essence of the film was the decline and powerlessness of the profession. The private investigator as relic.

This wasn’t Philip Marlowe or Sam Spade pounding the streets for clues or uncovering corruption in the noble, traditional sense à la Raymond Chandler or Dasheill Hammett. No, the protagonists in this tale are downtrodden like most everyone else was in the ’70s… and living in (perfectly coined by Duane) a “mean, sunbaked” Los Angeles of the time that had little pity for their ilk. 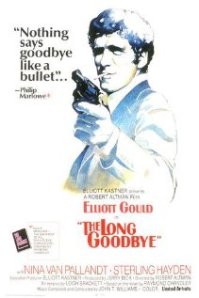 And speaking about Marlowe…

“Like Hickey and Boggs, The Long Goodbye is as much about friendship and betrayal as it is about violence and murder. P.I. Marlowe’s primary purpose is to clear his friend’s name and to help a woman find her disturbed husband, whom he believes she loves very much. As in Hickey and Boggs, there is a vicious gangster, Marty Augustine, looking for the person who took his money. The mystery that ensnares the characters is something that Philip Marlowe stumbles upon. He does not wish to unravel it but cannot help doing so. The 70s Marlowe is a man lost in a world he does not understand.” ~ Elizabeth Ward

Robert Altman’s take on the genre in The Long Goodbye (1973), and especially on this formative character of the literature, pre-dated, by more than a year, what most fans believe was the quintessential neo noir of the latter half of the 20th century: Chinatown. Noah Cross’ immortal quote from that film could have easily been suited for this:

“You may think you know what you’re dealing with, but, believe me, you don’t.”

Leigh Brackett’s screenplay of Raymond Chandler’s ‘The Long Goodbye’ novel has a dream-like quality to it. This was Marlowe (Elliott Gould) as a Rip Van Winkle-like character waking to a new world, and always playing catch-up. 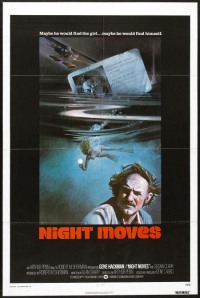 As Eileen McGarry wrote in her film description for the Film Noir: the Encyclopedia:

“The chief motivation behind the narrative structure of Night Moves is Harry Moseby’s compulsive “need to know.” But whereas this curiosity, combined with emotional detachment, was Philip Marlowe’s strength, it is Harry’s fatal flaw… The illusion that each can control his or her life, make choices, and impose meaning on other people’s choices, obscures the one truth of their universe: that there is no truth and no amassing of evidence will make any difference.”

This was the paradigm of the post-noir P.I. meeting up with the post-Watergate eon. Arthur Penn, like Altman, gave the genre a modern flavor with this mid-era film, Night Moves (1975), but with an unmistakable ’70s aftertaste. A metaphor for the decade that spawned it.

It remains a hard-boiled mystery, with all of the clues laid about and within easy reach of its principal (Gene Hackman in a role he was born to play). However, inside this anti-detective masterpiece (screenplay by Alan Sharp), you had a protagonist too overwhelmed with his own problems to spot and solve them for his clients.

Even though the film spent a good bit of its tale in the Florida Keys (Key Largo anyone?), as with the other two works, its core still lay in the City of the Angels. All the cynicism, fatalism, and moral ambiguity long tied with the genre felt right at home in this city and its time. Under a bright sunshine that brought its heroes no warmth.

25 Responses to “For Noir’s Sake: A Sunbaked Triple”