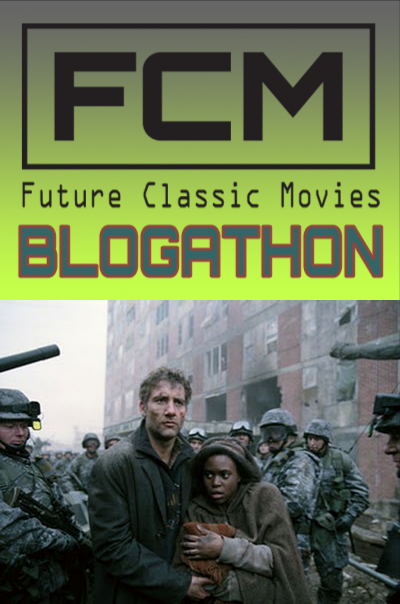 My blogging colleague, and confirmed TCM addict, over at Paula’s Cinema Club had a most interesting idea for her blogathon, titled the Future Classic Movies. Paula posited the following:

“… I’ve often wondered what movies from the 21st century would stand the test of time, like Casablanca, Gone With The Wind or Out of the Past. If there is even such a thing as TV and channels in the future. What would programming look like in 30 or 40 years from now?”

The following was my contribution to this online project and surmises why I think the film adaptation by director Alfonso Cuarón and his screenwriters of P. D. James’s 1993 novel The Children of Men will endure to become a Future Classic.

A brief synopsis of the film: in the future time of 2027, the world of man has taken a decidedly bleak and chaotic turn for the worst. The world appears on the brink of a total societal breakdown. Terrorism and environmental damage are rampant, and the few places on the planet where things are seemingly under control (in the U.K. for this story) seem to have gone the fascist, military control route… big time. The reason for all of the despairing calamity comes down to one significant fact: the 18 years of human infertility. Theo Faron (marvelously played by Clive Owen) is one of the lucky ones — as defined by the fact that he is a U.K. citizen with a job, and not one of the ill-fated refugees clamoring to stay on Britain’s shores.

You can tell the military and politicians consider them the ‘barbarian horde’ by their less than humane treatment of the outsiders. The Britain that “soldiers on” has become the cold gray sanctuary (and a testament to how bad it is elsewhere). The former activist is content to live out the remaining years of shared melancholy in alcohol-induced drudgery with his handful of friends. At least, before they euthanize themselves. Just about everyone here is in a joyless state. That is, until his estranged wife (the wonderful Julianne Moore in the all-too-short role of Julian) re-enters his life with a proposition to find a way to illegally transport a fugitive (“a fugi”) across the police state lines.

[spoiler warning: some key elements of the film are revealed in this article]

It’s almost a point of pride that I came around in appreciation to some extraordinary film only after their subsequent re-screenings. Let the record show I did not hold in high regard any of the following initially: Pulp Fiction, Blue Velvet, and Blade Runner. The same was the case here. My initial viewing of Children of Men left me with the impression that this was a remarkably disheartening film done with extraordinary skill by the rising Mexican director, Alfonso Cuarón. Honestly, I hadn’t any mounting desire to see it again anytime soon because of its initial impact. I’ll simply write that off as I did not know what I was looking at (yeah… that sounds like CYA to me, too). Thankfully, my fellow blogger and duo post contributor, the Scientist Gone Wordy roused me from that early disregard and got me to take a closer look at it once more. I’m surely glad I did.

I now firmly believe the story makes an insightful look at humankind’s capacity for self-awareness, emotion, and ultimately… hope. Author James’ (along with the film’s screenwriters Timothy J. Sexton, David Arata, Mark Fergus, Hawk Ostby, and Cuarón himself) concept of making every conscious being in her tale (those left in the resulting pandemonium, that is) painfully mindful to the fact that each of them is the last of their kind is a dauntingly stark idea to come to grips with. For both those on the screen, as well as those watching the film or reading the novel. Being sentient is a double-edged sword, it seems. You are aware of yourself and others, at least those you care about, but have come to know, all too well, your time on this earth is fleetingly finite. For most of us, the only comfort found is the fact that we constantly renew ourselves (as a species) through human reproduction, be it naturally or artificially. We take solace in living on through our children, whether they’re yours personally or not.

But, when there are no offspring, only one denuded and grim future remains. And it’s here that the filmmakers went above and beyond with their story and art direction. They present the audience with a visual terrain that looks like it is headed for its last winter, alright. This is especially so when the story reaches the Bexhill refugee camp. Think of it as a cross between the cold, dreary England shown in Mike Hodges’ terrific Get Carter film (for which supporting actor Michael Caine also appeared) and Stanley Kubrick’s horrific killing ground from the Battle of Huế in his Vietnam War motion picture, Full Metal Jacket. The children of men in this story certainly have a field day with it to be sure. Additionally, one cannot ignore how the movie’s producers conspicuously incorporated some recent and stark remnants of the decade of the 00’s as part of the film’s social and political commentary (ones that will undoubtably resound for years to come). Once the lead characters (including Claire-Hope Ashitey as the importantly pregnant Kee) reach the climatic third act, the film is packed with allusions and symbolism relating to this distinct period: 9/11, Abu Ghraib, torture, and the political scapegoating of immigrants. The relic of which remains quite powerful.

As well, the symbolism of religion is used quite effectively throughout the picture by director/writer Cuarón. The Christian exemplars of the Fishes (the revolutionary group depicted) and flocks (the sheep and shepard walk-through were a tad obvious for those who’ve seen the film) were certainly present, and were used to instill a faith that there’s a light at the end of a dark tunnel. All the more, there’s the shadow of a Hamas-like uprising presented in the refugee camp, too. Even with all that, this is essentially a journey film — Theo’s journey. His path from utter pessimism (through the darkest of times and the loss of his dearest friends along the way) to ultimately one of hope at his, and the film’s, end remains at the core of the story-line. As a parent of two myself, I was moved to the point of tears at where Theo arrives by the film’s surprising and abrupt end title. The other unexpected sign I stumbled upon in later viewing was the optimistic use of animals and pets. Note all of the cats and dogs that Theo attracts throughout the film. It is a purposeful ploy in this impressive work, and meant to buoy the character (as well as the audience) across the hardship.

I’d also note another extraordinary facet of this film, besides the passage and distinct mood of the piece. That is, director Alfonso Cuarón’s decision and execution of the number of long takes and extended tracking shots used throughout Children of Men. The camera work alone (with additional kudos to Peter Hannan and Emmanuel Lubezki) in these startling segments is nothing short of astonishing when you take them all in. On repeated viewing, one in particular really hits me like no other I’ve come across. The climatic action set demonstrated the supreme skill of the camera operator, the director and ensemble actors, and the unpredictability of the story all at once. If you’ve seen the film, you know the one I’m referring to. It is Theo’s rescue of Kee at Bexhill, and their subsequent walk out of a building, all of which occurs in the midst of a violent, chaotic, bullet-ridden firefight. The scene somehow, among all of its pervasive bloodshed and decimation, managed to hold both turmoil and hopefulness in a precarious balance, and never dropped either (or the viewers’ attention) anytime along the way. That the segment is of the almost blindingly miraculously sort is the point. It remains one virtuoso moment, something that only the art of the moving image can deliver.

Simply put, Alfonso Cuarón’s Children of Men is an astounding piece of film-making, period. Apocalyptic tales are a dime a dozen these days. Still, that this film successfully incorporated an original story around a strikingly bleak setting, and yet managed to come out anywhere near a hopeful and expectant prospect makes it extraordinary, in my mind. After my initial screening of the film, I’d read it had a growing reputation among fans along the same lines of a certain startling and thought-provoking sci-fi film from 1982, Blade Runner. Admittedly, I scoffed at the idea, at first. Yet, after re-tracing Theo’s passage through a ruined human landscape, one at the outset that is simply counting down the number of his fellow-man in dreary fatalism, I’d surprisingly reached a different conclusion. Perhaps, just as Theo finishes his life knowing he helped nurture an uptick in that number, this story by the end laid claim upon that unexpected something only those films that qualify as classics ever achieve: a cinematic timelessness. Director Alfonso Cuarón clearly demonstrated he had similar budding and visionary chops of someone like a Ridley Scott with this endeavor. Theo’s journey is as remarkable as Rick Deckard’s, or maybe better relating to Roy Batty’s, in my opinion. For all that, this film in particular remains one to savor, contemplate, and return to in the years to come.